Illicit RMT In EVE Online: How Much?!

One of the most frequently asked questions I get is: how big is illicit real money trading in EVE Online? So I set forth to find out. In the past I have monitored a site that traffics in virtual currencies named Player Auctions. The website is kind of famous, although possibly not so much at the present time. In addition to appearing in the past in publications like the New York Times and Washington Post, academic researchers also use data from Player Auctions. In one instance, Indiana University's Professor Edward Castronova observed character sales on the site showing that players in Everquest valued male avatars more than female avatars (actual study here). 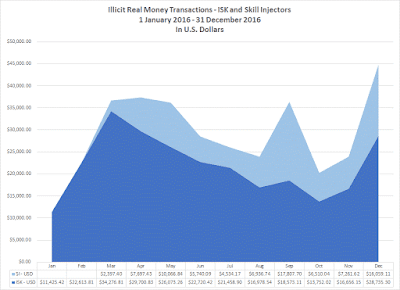 Over the course of 2016, I recorded 3,830 ISK sales by 117 unique sellers totaling just over 36 trillion ISK. I also observed 1,307 sales involving skill injectors totaling 19,376 injectors. With +5 learning implants and the proper skill plan, that comes out to approximately 425 years of character training. The total sales amount of the transactions in U.S. dollars almost reached $348,000. Throw in PLEX, character, and item sales and the value of sales on Player Auctions probably reached the $400,000 figure.

While those numbers are high, I'd like to put them into perspective by comparing them to the activity within the New Eden economy. In the region of The Forge, home of the game's main trade hub in Jita, players traded 1.419 quadrillion (1,419 trillion) ISK for game time. Basically, the sale of skill injectors is only 2.5% of the total ISK players exchange in Jita for game time on CCP's approved market.

The numbers surrounding the purchase of skill injectors is even more lopsided in favor of players following the games EULA and Terms of Service. Players traded 2,252,185 skill injectors in The Forge in 2016. That means that over 100 times more skill injectors were sold in the approved in-game market than were sold on Player Auctions.