After an extremely slow start to the Council of Stellar Management 12 election season, we finally reached 31 candidates with posts on the CSM Campaigns section of the EVE Online forums. As of midnight Monday EVE time, 4 of the 14 incumbents (Bobmon, Jin'taan, Steve Ronuken, and Xenuria) had created campaign threads.

The big news CCP released Friday was a reduction in the size of the CSM from 14 members down to 10. From the latest CCP announcement:


The size of the CSM has not been static and has changed several times. The current number of delegates is 14. When that number was first implemented, half the council consisted of alternates. Another change saw all 14 become full members with CCP committing to flying 7 members to attend on-site summits. During the last two summits we’ve invited all members to attend in person as a temporary measure to strengthen the CSM. We’ve now discussed future arrangements both internally, and with CSM 11, and we’ve decided to reduce the number of members to 10, all of which will be invited to summits.

I think everyone's minds started to ponder how does the change affect getting elected to the council. According to the wiki page that CCP points people to in order to understand the single transferable voting system used in CSM elections, "Systematically lowering the number of representatives from a given district directly benefits larger parties at the expense of smaller ones." 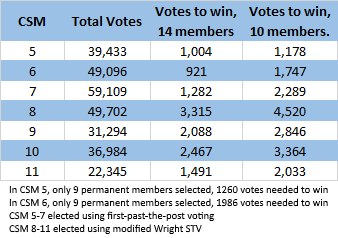 The chart above shows the vote totals plus the minimum number of votes needed to win a seat for all the elections in the one-year term era of the CSM. The numbers above are a bit confusing because they include elections using both first-past-the-post and single transferable vote systems. First-past-the-post is they voting system, "in which voters are required to indicate on the ballot the candidate of their choice, and the candidate who receives more votes than any other candidate wins." So in the CSM 5, 6, and 7 elections, if a candidate received 1004, 921, and 1282 votes respectively, the candidate won.

In a single transferable vote election, candidates win if they reach the Droop quota. The Droop quota is explained on Wikipedia.


Sources differ as to the exact formula for the Droop quota. As used in the Republic of Ireland the formula is usually written:

(The extra parentheses, while not strictly necessary from a mathematical standpoint, are often included in order to make the formula seem less ambiguous to non-mathematicians—if calculated out of sequence, an incorrect result would be arrived at, producing an incorrect quota.) It is important to use the Total Valid Poll, which is arrived at by subtracting the spoiled and invalid votes from the total poll.

While in theory every STV election should see the right number of candidates elected through reaching the quota, in practice many voters may only vote for a small proportion of the candidates on the ballot paper, such as only those candidates from one party, or even only one candidate. Those votes are known as 'NTs', or 'non transferable votes', and the effect of their removal from the total valid poll may be to reduce the total number of votes available to such an extent that the last candidate left in a race may not actually have enough votes to reach the quota. Nevertheless, in reality, as no other candidate may mathematically be able to overtake them as the candidate nearest to the quota, they may in such circumstances be deemed elected "without reaching the quota". The quota is in fact constructed to ensure that it is mathematically impossible for candidates to achieve the quota beyond the number of available seats.


I ran the code for a 10-member election and the following candidates would have won:


Of the 10 winning candidates, three would not have reached the 10-member election quota of 2033:


For those interested, Erika Mizune was the last candidate eliminated in both the 10 and 14 member elections. She also would have secured a seat on CSM 11 if Apothne had not dropped out due to health reasons.

So what does the reduction of the number of members on the Council of Stellar Management mean for the election? Expect the big blocs to dominate even more than they do currently. The domination is not guaranteed; the best example of a major alliance failing to elect a member onto the CSM is TEST. Also, a huge turnout would negate the advantages the big blocs possess. The lower the turnout, the more organization matters.

Perhaps the most important stat is the increased number of votes a candidate needs in order to win. For CSM 11, the last winning candidate would have required 25.4% more support in a 10-candidate election than in the 14-candidate election that actually took place. The application period still has 11 more days to go, but I have to wonder if anyone can break through the lock the major groups in EVE should have on the CSM.
Posted by NoizyGamer at 6:00 AM