In the middle of trying to keep up with the increasing number of candidates, I squeezed in some time to do a little mining in low sec over the weekend. I figured I needed to mine between four and six loads of hedbergite in order to get enough zydrine to finish making a Nestor.

As much as I've complained in the past about changes in low sec negatively impacting mining, I'd like to go over the changes I use whenever I mine in low sec. The big changes were the Higgs Anchor Rig, bookmarks visible in space, and adding a second mining turret to the Procurer.

The Higgs Anchor Rig, contrary to popular opinion, is not a rig designed to roll wormholes.  With the launch of Kronos in June 2014, Procurers received an increase in its base speed from 90 m/sec to 160 m/sec in order to combat the practice of miner bumping in high sec. In high sec, the tactic to prevent ganking is to remain in constant motion by orbiting an asteroid. But what works in high security space does not work in low. In low sec, the way to survive is to mine while aligned to a distant celestial object or bookmark. That way, when a hostile ship lands on grid, the miner can click one button and instantly warp off.

The problem with the speed increase is that mining while aligned required more changes in direction in order to remain in range of an asteroid or block of ice. The more changes in direction required, the more vulnerable a mining ship is, especially to cloaky bombers who have no decloak delay. By putting a Higgs Anchor Rig on my Procurer, I only have to change direction once to remain within mining range of an asteroid. An additional effect is that the Higgs Anchor Rig also makes a ship more agile, and thus quicker to align, than a regular Low Friction Nozzle Joints rig.

The change to the UI that allowed bookmarks to appear in space forever changed the way I mine. I try to have at least four points surrounding an asteroid belt to which I can align. Where celestial objects like planets, moons, other asteroid belts and stations are lacking, I make a bookmark to which I can warp. I also make a bookmark either above or below the belt that I can use to warp to in order to select the point in the belt I wish to enter.

The best part of bookmarks is the ability to either right-click on the bookmark and leave the "warp to zero" option up or use the radial menu to warp to the bookmark. Then all I have to do is click on the warp option to warp away. The expansion of the grid to a radius of thousands of kilometers in the spring of 2016 provides more warning time than ever before. Perfect for hanging around an asteroid belt for a mining cycle longer than is really prudent.

The final change involved changing the number of mining turrets on the Procurer from one to two. Yes, that means some increased costs as I need more mining crystals, but reducing the amount of micromanagement is well worth the cost. I probably love the change as much as Covetor/Hulk pilots hated losing a mining turret. Combined with the slower speed caused by the addition of the Higgs Anchor, I often can lock two asteroids, start up the strip miners, and not have to worry until the ore hold is full. Such a situation never happened when I only had one mining turret. In a dangerous environment like low sec, the less time spent managing my strip miners is more time I can spend paying attention to potential threats.

All three factors came into play yesterday while finishing up my mining of hedbergite. I was aligned to a bookmark, peacefully mining away. A member of SOLAR FLEET jumped into system, but given the distance the asteroid belt was to the system's jump gates, I knew he couldn't pick me up using the directional scanner. So I kept mining. Thankfully I didn't have to worry about my strip miners because I had selected a couple of big rocks. All I had to do was watch to see if a ship warped onto grid. Sure enough, a Hecate (the Gallente tech 3 tactical destroyer) showed up on grid about 50 km away. I hit the warp button and flew away to a bookmark on grid. I then calmly selected my station and warped away with about 1/3 of my ore hold empty. And once I was safely docked, I got the shakes.

After the Russian departed the system, I wound up finishing up my mining for the day in another belt I had bookmarked. Low and behold, I found another feature I like. A gang of Thukker Mix Skiffs quietly mining away. Since my standings with Thukker Mix are 7.95, I decided to join them. The only bad part of the experience is that I was so nervous about getting jumped that I forgot about trying to take a screenshot of myself mining with the NPCs. Perhaps next time.

I probably could have saved myself a million ISK in fees if I had built the Nestor in low sec. But I chickened out and moved the processed zydrine to a station in high sec and built the Sisters battleship there. I then completed the plan by purchasing a Damnation to fly alongside the Nestor and provide boosts. Now I only have to buy the fittings for the two ships and my quest is complete. I'm now the proud owner of a Nestor. 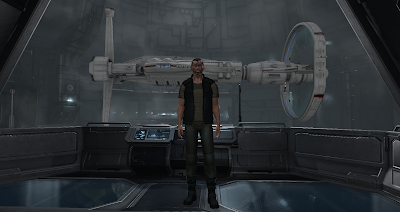