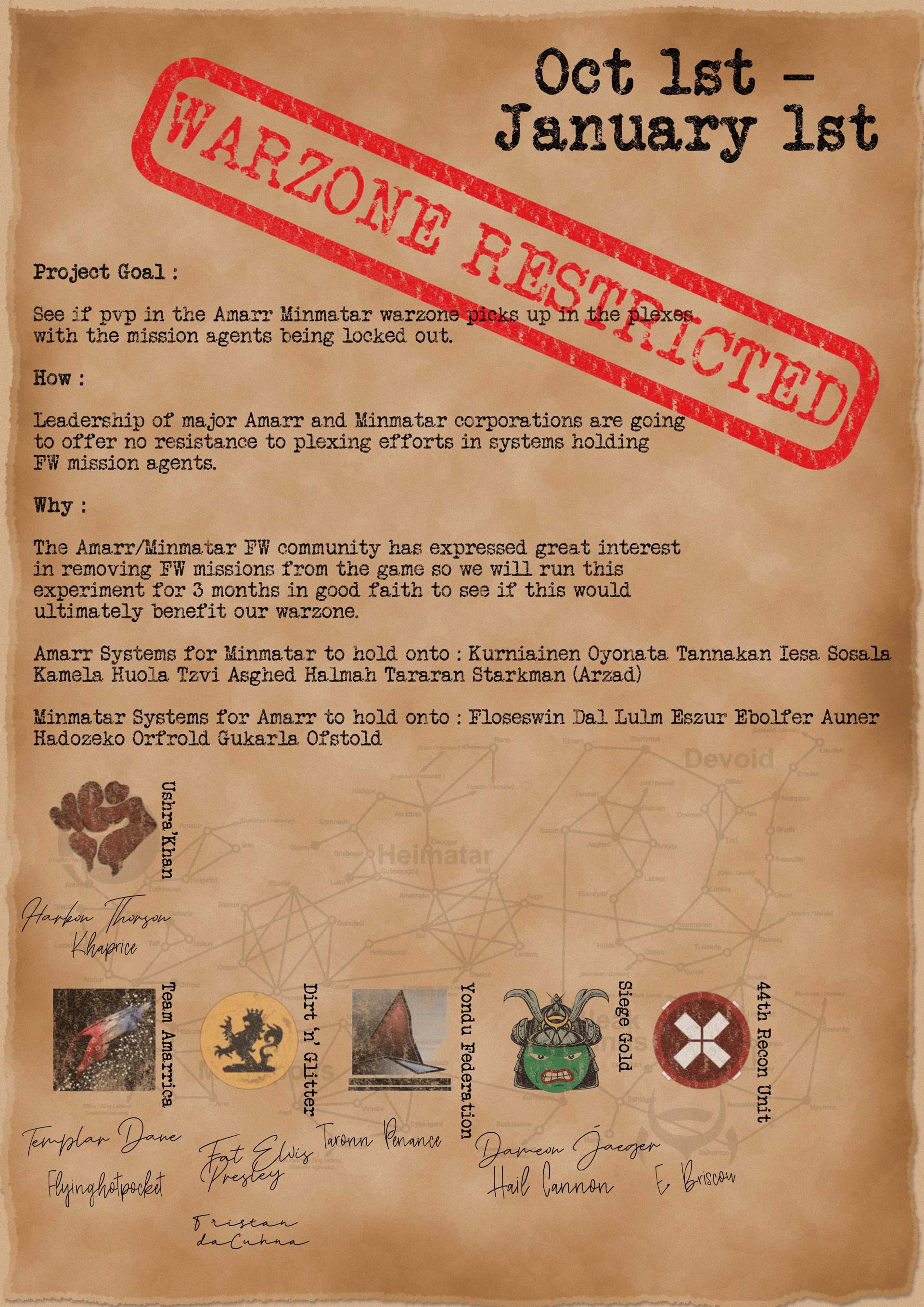 The following message was posted to both the official EVE Online forums and to the EVE Online sub-Reddit.  I post the message here because I don't want to lose such an extraordinary message. Plus, the effort might prove interesting to non-EVE players.

Today will be, we hope, a milestone to avoid the gravestone of our own corner of space.

The majority of Amarr and Minmatar Faction Warfare players agreed through their corps and alliances to lock down low-sec mission agents by swapping ownership of the systems where the latter are. The agreement comes into effect today and diplomacy is still ongoing to add more logos to the document above even at the temporary expanse of some of our RP traditions.

For the context, a FW Matari pilot can’t dock in an Amarr owned system and therefore can’t use the TLF mission agents there. And vice-versa : an FW Amarr capsuleer can’t dock and use 24th Imperial Crusade agents in a Minmatar controlled system. Only will remain the High Sec agents with their lower payout, ending in practice FW missions as an isk printing machine.

This decision doesn’t come lightly as it was our main source of income.

But those missions came at a price :

This experience will run provisionally for three months to collect data and draw attention to the FW and Low Sec situation.

Deleting missions on the long run is not a shared opinion. Most players want a rework of the missions to integrate them truly in the pvp lifestyle of Low Sec and FW. Waiting for the end of time and this rework, we decided to take the matter in our own hands.

What we are doing is the FW equivalent of asking Null Sec alliances to voluntarily unanchor their keepstars to fight super proliferation. But we will do it. This decision is just the tip of a cross faction discussion which has been ongoing for months on a FW Discord. You can find this Discord and all the votes there : FW Discord. You are welcome to join it.

See you to pvp in a farmer free warzone we hope,

What metrics could the FW players look at to judge the effect of their efforts? I can think of three. The first is the number of ship killed in low sec. The second is the prices of various items found in the loyalty point stores of the 24th Imperial Crusade and Tribal Liberation Force, the two NPC corporations that supply FW players with items. The final metric is the ISK sink for loyalty point stores found in the monthly economic report.

Three major factors will complicate any such analysis. The first is New Eden's recovery from Hurricane Hilmar. Players will find themselves digging out from that event for months. The second is the changes in which ships can fit cynosural field generators. We really don't know what effect that will have on the amount of PvP in low sec. The third, of course, is that all of the farmers will just go to the Caldari-Gallente war zone and continue their ISK making ways there.

Whether the effort succeeds or fails, I do have to give mad props to those making the effort. Maybe CCP will finally push factional warfare fixes up their priority list. But I doubt it.

Posted by NoizyGamer at 8:14 AM