September saw CCP lift the Blackout on null sec communications on the 16th of the month. Looking at the data is a bit of a problem as cynosural field changes arrived with the 9 September release. Still, the start of October is the first time we get to assess the damage done by Hurricane Hilmar and see how EVE players begin to recover from the developer-created disaster. With the early release of the monthly economic report for September yesterday, here's a rare Saturday post looking at the number of NPC and player-flown ships destroyed last month. Hopefully, the numbers below will serve as a useful supplement to all the economic analysis sure to pour out of the EVE media over the next few days.

First, a look at the top 10 regions in New Eden for NPC kills.

Even with normal local available for half the month, we can see more ratting activity in null sec. Deklein and Cobalt Edge joined Delve in the top 10 regions with the most NPC kills. Perhaps more notable was the 41.9% drop in NPCs killed in Delve in September. We will need to wait for the release of the September MER to see if The Imperium shifted its focus toward mining. 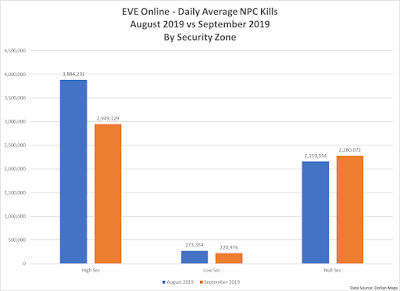 The daily average of NPCs destroyed by players possibly met the expectations of a lot of players. The number of NPCs in high security space decreased and the amount in null sec increased. What I think many players will find surprising is the size of the changes. In September, players killed nearly 936,000 fewer NPCs in high sec as compared to the month before. The corresponding increase in null security space was just short of 178,000 NPCs per day. 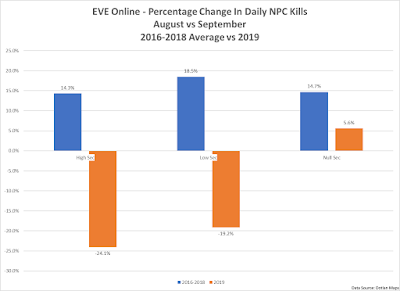 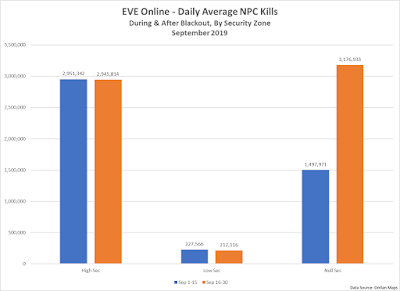 With CCP restoring local in null sec back to normal on 16 September, many players expected an exodus of players from high sec back to null. Looking at the number of NPCs destroyed both before and after the event suggests that did not occur. While the daily average number of rats killed in null sec jumped an average of almost 1.68 million per day, the number of NPCs destroyed by players in high security space only fell a little more than 5,500 per day. Even including low sec, the drop of NPCs killed in empire space decreased by 21,000 per day, or 1/80th the increase in NPC kills in high sec. Clearly, a mass exodus of empire PvE players to null sec causing the increase in activity in the second half of September did not occur. 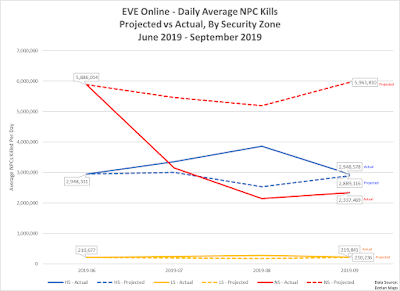 The individual monthly breakdowns are useful, but the question I get is, "What was the overall effect?" As one might expect, the regions that maintained normal local didn't receive much of an impact. While the event ran, empire space, consisting of the high and low security bans, saw increased activity. But once local was restored to null sec, activity returned to normal levels. In high sec, the average number of NPCs destroyed each day rose by 247 from June to September. Applying the average monthly changes in NPC kills from 2016-2018 to the actual number of NPCs killed in June would have resulted in a 2% drop. Null sec is the opposite. Over the last three years, null sec has averaged a very slight increase in NPC kills between June and September. In 2019, the decrease was 60.3%, or over 3.5 million fewer NPCs killed each day.

First, a look at the top 10 regions for player ship losses in September.


Once again, Detroid was the only null sec region on the list of top 10 regions for ship kills. An interesting development was that with only 1 more player ship loss in Detroid in September, the region jumped from 10th to 5th in the rankings. 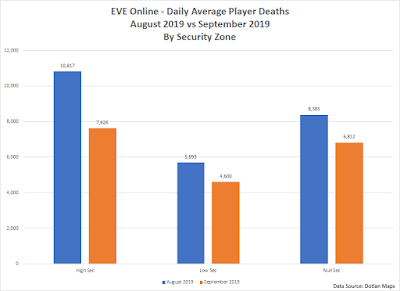 If the numbers for NPCs dying were bad, the number of players dying throughout New Eden was a virtual drought. Overall, 5,857 fewer player ships died on average each day in September as compared to August. The decline was spread throughout all three security bands, with nearly 3,200 fewer player ships exploding in high sec, almost 1,100 in low sec, and over 1,500 in null sec. Even accounting for the extra day in August, September still witnessed over 175,000 fewer ships dying in New Eden than the month before. 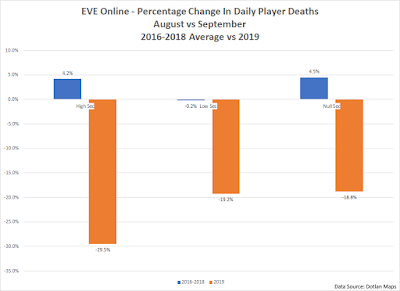 The results in September also went against the trend of the last three years. Between 2016-2018, ship losses in both null sec and high sec would increase 4.0% to 4.5% with a very slight drop occurring in low sec. Instead, all three security bands experienced double-digit declines, with the drop in high sec reached almost 30%. 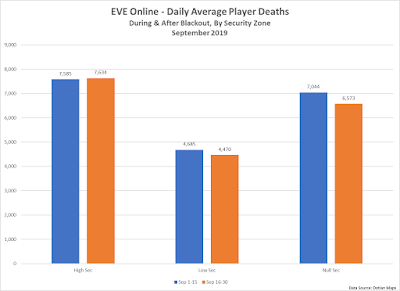 A look at ship losses after the end of the blackout might surprise some players. The number of player ship losses decreased outside of high sec in the second half of September. Low sec witnessed a decrease of 4.6% while null sec saw a 6.8% decline in player ships exploding. Apparently, the cyno changes had a bigger negative effect on PvP than changing how local worked in null sec. 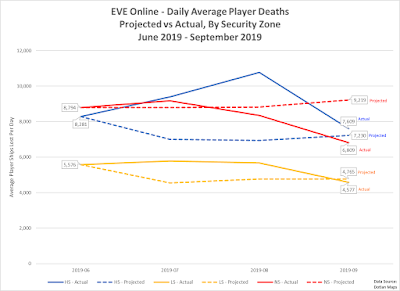 The picture of PvP in New Eden during the summer of 2019 was pretty bleak. Not so much for both security bands in empire space. Yes, both high sec (-8.1%) and low security space (-17.9%) saw drops in the frequency player-operated ships disappeared in a blinding flash of light. The dip in the low sec numbers is even greater than the average over the previous three years. But null sec experienced a decline of 22.6% in the average number of players killed in September compared to the beginning of summer (or winter for those in the Southern Hemisphere). Perhaps more concerning, the number of ships exploding actually went down in the second half of September.

I think the most important takeaway from the Dotlan data on NPC kills and player deaths is that the effects of the two-month implementation of delayed local in null sec will linger for months to come. Just because CCP flips a switch doesn't mean players who left the game due to a feature will return. As we saw with the war declaration system prior to the changes over the past year, players who disengage with EVE often don't come back.

I don't want to go too far beyond what the numbers in this post show. But one aspect I think is important is that null sec PvP took a giant hit with the blackout. I created one last graph to drive home the point. 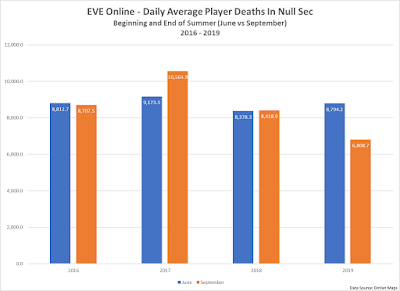 This post is a quantitative examination of the activity in New Eden in September. Perhaps the quality of the fights players experience improved as the generation of kill mails slowed. From what I can tell, however, after an increase in July, the number of players dying in null sec decreased as the prey increasingly stayed docked up.

Looking into the future, I can safely predict the number of NPCs dying in New Eden will drastically increase, especially in null security space. An increase of 75% is entirely in the realm of possibility, with an outside chance of a doubling of NPCs killed. The number of player ships dying is a different story.

I want to predict that CCP is going to announce a new expansion that will get everyone excited and out in space blowing each other up. With the "Chaos Era" philosophy in play, I don't think that will occur. I'll try to remain positive and say that the number of ships exploding will increase in October but won't increase as much as the average increase from 2016-2018.

So overall, I predict a lot more explosions in October than in September. Now, if CCP will help me out and start up the hype train for an expansion launching on 3 December.
Posted by NoizyGamer at 9:42 AM