Seriously CCP? A special patch to implement warp speed changes to cruisers, battlecruisers, and battleships instead of putting the changes in the regularly scheduled patch on 8 October?

Perhaps I should give CCP the benefit of the doubt. If the developers had to deploy a patch to fix/mitigate the deep safe spot bug, maybe they accidentally left the warp speed changes in the build. But this is smelling like CCP trying to advance the narrative of the so-called "Chaos Era" by instituting a change in the middle of the month, just as they did in September.

Whatever the reason, I should note the changes.


Every Cruiser, Battlecruiser and Battleship now warps faster than before. Ship Warp Speed attributes have been increased for the following Ship Groups:
Travelling via autopilot will also be faster now with the warp in distance changed from 15km to 10km.

Military experts have determined that using auto-pilot is, to use a technical term, A TRAP!!! Please don't do it.

I guess I shouldn't complain about all these ships I used to outrun in my Procurer with the aid of warp speed and agility implants becoming much faster than the 3.28 AU/sec I travel in warp. Judging by the numbers, the hunters need all the help they can get. 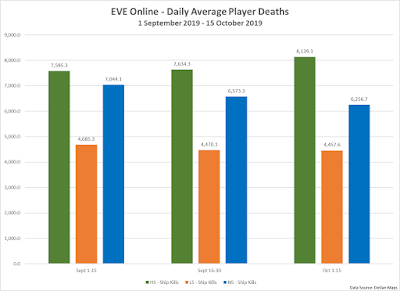 Since the lifting of the blackout on 16 September, ship losses have continued to decline in both null and low security space. The average number of ships killed each day in the first half of October declined 11.2% in null sec and 4.9% in low sec as compared to the first half of September.

Looking at the statistics, I have to wonder if the cyno changes really had that big an impact on the amount of PvP occurring in New Eden.  The end of the blackout definitely provided more targets in space. 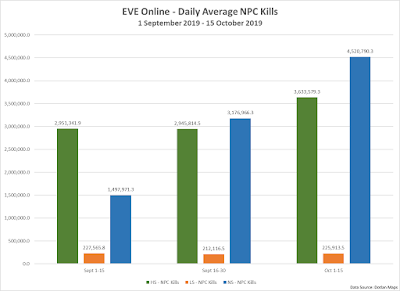 The amount of NPCs killed in null sec has tripled from 1-15 October compared to 1-15 September. More targets in space means more player ships dying, right? I'll have to ask some PvP types at EVE Vegas why the number of ship exploding in space is declining instead.

I won't complain too much about CCP making the job of hunting me in a low sec belt mining in a Procurer easier. With the recent changes in Triglavian content, I pretty much mine exclusively in high sec now. These changes are just another reminder to not go back into dangerous space.
Posted by NoizyGamer at 8:25 AM