A Slight Change To The Moon Mining Changes 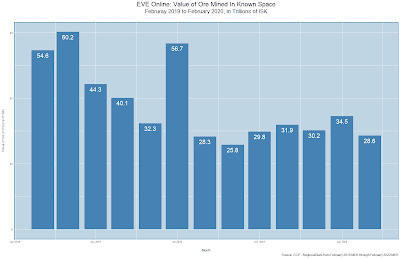 One of the problems with looking at the monthly economic reports are I never really know if CCP considers the situation good or not. For example, CCP has worked diligently on reducing the amount of resources collected in the game over the past year. Last month, the New Eden economy recorded only 28.6 trillion ISK worth of ore mined outside wormhole space. Year-over-year that is a reduction of 47.6%.

More mining nerfs are incoming in April. Last month, CCP announced moon mining changes that would reduce the amount mined even further. The plan was to remove all basic ore types from all moons. That changed today. In the latest dev blog, CCP announced that pyerite and mexallon will still be found in some R4 moon ores. 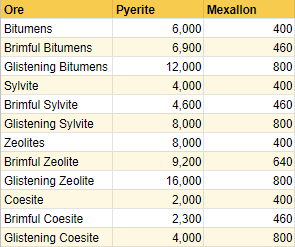 So while I still want to know what CCP considers a good level of mining, I think I can say we're almost reached the goal.
Posted by NoizyGamer at 5:33 PM