On Sunday, in addition to running a Crimson Harvest site, I decided to do a little sightseeing. I have an alt logged off in the Triglavian system of Raravoss so I logged in and poked around. 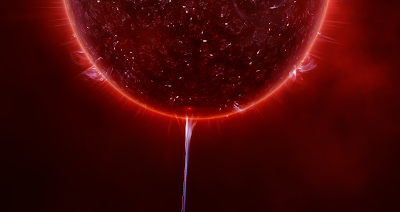 The first thing I did was warp to the sun. The Triglavian thingy was still doing the Triglavian magic that transported the system into the region of Pochven. I noticed a mobile tractor unit at 0 to the sun. I was still trying to figure out why someone left it there when a small Triglavian NPC gang warped on top of the structure. I was 100 km away, but I didn't know if my presence had triggered the Triglavians into arriving. Since I was flying a Cheetah, I decided the safe play was to warp to a planet. 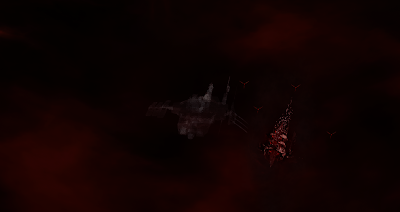 Looking at my overview, I saw a line for the inactivated Sasiekko gate. Needless to say, I had to see what remained after the shift in the cluster. The picture was mostly Triglavian red with 4 disintergrators stationed around the structure. I guess moving the disintergrators was more trouble than it was worth. 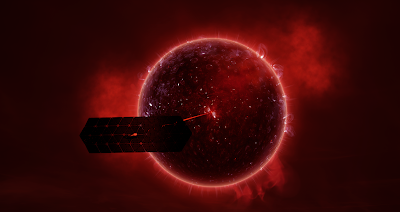 Next, I decided to return to the sun and take a look at the Dazh Porevitium Transmuter. The info tab sounds as impressive as the structure itself.

The construction of these vast structures is clearly a key goal of this phase of the Triglavian Collective's invasion campaign. EDENCOM intelligence has assessed thse huge arrays with their central structure as stellar harvesting installations capable of delving profoundly into the stars they are orbiting.
The clear intent of the unimaginable spatio-temporal manipulations these structures are undertaking is to harvest certain resources, and in doing so completely transoform the nature of the star itelf. This assessment has been implicitly confirmed by this type of installation's repeating monitor signals containing the deciphered term <<Dazh Porevitium Transmuter>>
While these structures initially carry out limited probing and sampling, the power and reach of the harvester escalates tremendously as an array of zero-point mass-energy entanglers is constructed around the core harvester. Barely understood Triglavian techniques that had hitherto seemed a mere scientific curiosity will surely have dire consequences for any star system where their full capability is achieved. 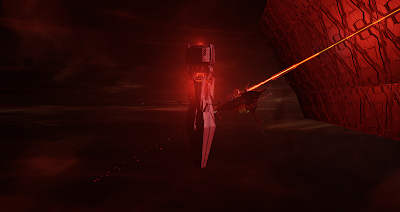 Next to the transmuter is an object called a Dazh Liminality Locus.

While this structure appears to be a variant of the Triglavian Collective's stellar observatory and accelerator structures, the activity centered on this installation clearly represents an escalation in the Triglavian campaign of invasion. A notable aspect of the structure is the extremely high signalling traffic that has been detected emanating from it. While most of this traffic is highly encrypted, a complex repeating broadcast that appears to be a becon or monitor signal of some kind has been partially deciphered. The contents of the signal include the term <<Dazh Liminality Locus>> and also refer to <<Xordaxh Chislov Zvemokorg noemata>>.
As with similar Triglavian installations there are clear signs that local space-time conduit technology is being used to "reach into" the core of the star to manipulate it in some way. It is considered highly probable that such activity is a prelude to stellar harvesting operations and a major invasion effort by the Triglavians.

After poking around Triglavian tech for awhile, I decided to look at the mining opportunities. 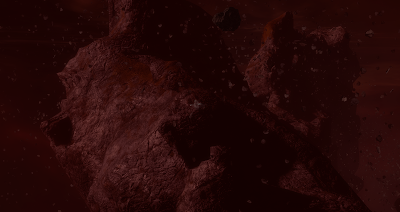 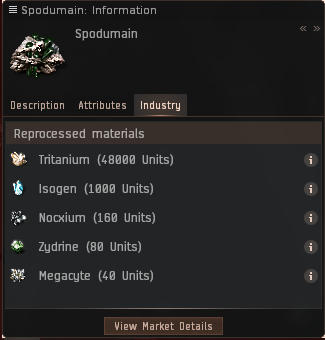 One can probably find the missing minerals needed for industry in the Ubiquitous sites. I honestly think CCP is hoping a new player civilization forms and builds itself up in the new Triglavian region. Can you imagine a Keepstar in the region? Before logging off, I decided I needed to look at one of the new Triglavian gates. So off I went to the Niarja gate. Once again, someone had left a mobile tractor unit near the gate. The purpose for all the MTUs became apparant as I witnessed a Triglavian NPC fleet stomping on a EDENCOM NPC fleet. Even if no one is in the system, the Trigs and EDENCOM fight their war, with someone scooping up the loot.
Afterwards I went back to my safe spot and logged off for the day. I eventually need to extract my alt from the region, but until then I have a way to observe any changes CCP might make in the future.
Posted by NoizyGamer at 6:00 AM