I didn't do much on EVE Online's 18th anniversary. CCP added the Capsuleer Day event and I spent a little time poking around. 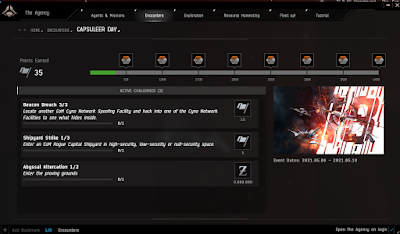 I didn't have the stomach for attempting the combat sites. The news article announcing the event claims the sites are tuned for battlecruisers and above. Even so, I think I've only taken a battlecruiser site running once or twice into low sec, and given the tendency of the NPCs to scram in the last event, I took a pass. Wednesday's patch contained an error and in the payouts for the final NPC battleship in the combat sites. Today's patch swapped the payouts of the final NPC battleship for combat sites in high sec and low. While the patch notes didn't give the values, helpful people on Twitter noted that the payouts for defeating the final battleship are now 5 million ISK in high sec and 20 million ISK in low sec.

Appears they changed that in today's update. Swapping the values of what appears to be HS and LS rats to 5mil and 20mil respectively. pic.twitter.com/DlhqReEDGq

But, as I noted before, the previous event scared me away from the combat sites. I took my trusty Cheetah into what I hoped was a quiet area of low sec, wondering where were all the anomalies and signatures on the way. I took a closer look and found my filters were still set up to probe down ships and drones. Once I correctly applied the filters ... SO MANY RED DOTS!!!!

One of the few acceptable uses for red dots is in the probing interface. The system I picked was full of signatures. I wound up identifying 2 combat sites, 1 gas site, 1 relic site, and 3 EoM data sites. That's right, 3 event sites in a single system.

The situation got better. When I warped into the first site, I landed 20 km away from the site's hackable container. I didn't make a mistake typing that last sentence. At least in low sec the EoM data sites only have one container. One container means no worrying about people cherry picking containers, leaving sites with only garbage cans to hack. Hack the can, the site despawns to allow new sites to spawn.

Once I completed hacking the first can, I was glad I was flying a Cheetah and not a Probe. I almost failed the hack. With the event data sites only containing one can, of course the can was difficult to hack. But forewarned not to expect an easy time, I successfully hacked the cans in the other two sites on the first attempt as well. 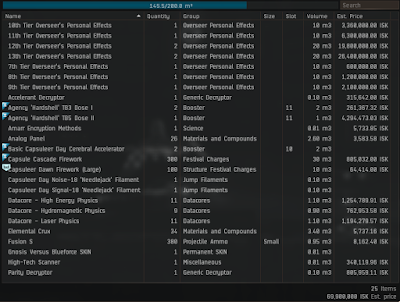 The loot wasn't too shabby. No ISK from a data site, of course, but plenty of Overseer's Personal Effects. I averaged almost 20 million ISK per site just in those items. The drop tables seem to offer either a SKIN or a cerebral accelerator. Another valuable items that dropped were the boosters. I don't know if only armor and shield boosting drugs drop, so I'll have to keep track.

One of the major annoyances from previous events was running out of cargo room. So far, the biggest space hogs are the Overseer's Personal Effects (90 m3) and the fireworks (40 m3). Still, I probably could fit one more site's worth of loot in my ship before having to dock up and unload.

Once docked, I sent my market character off to the nearest hub to put some of the items on the market. I'm trying to restock my orders as I let them fall to under 10 million ISK in value. The ISK was nice, but I really need to work on having consistent income.

I have to say at the end of my first night participating in the event I had fun. I do need to leave a little more time to play, though. I didn't get around to cashing in my Overseer's effects. As is often the case in EVE, I can use the money.

Posted by NoizyGamer at 5:00 PM