The financial situation was complicated by the company taking over the publishing of Black Desert Online from Kakao in North America and Europe in February. On the call, Pearl Abyss disclosed that while bringing in ₩20 billion from the North American and European markets from 25 February to 31 March, the company could only recognize 46% of that revenue on its books. The company expects the numbers to return to normal in the second quarter. 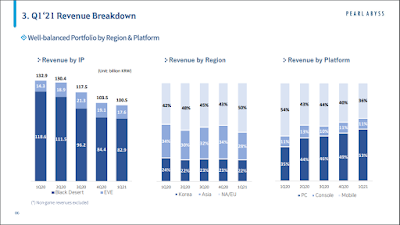 For the fourth consecutive quarter, the Black Desert IP recorded a drop in revenue. While the 1.8% decrease from Q3 may seem minor, year-over-year Black Desert has experienced a quarterly revenue drop of 30.1%. The EVE IP experienced a drop of 7.9% compared to the previous quarter. Pearl Abyss attributed the drop to "slightly weaker mobile revenue." On the positive side, EVE Online and EVE Echoes still recorded a 23.1% increase in revenue compared to Q1 2020. 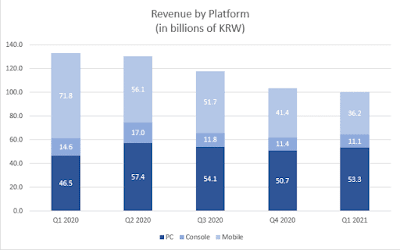 EVE Echoes is not the only mobile game doing poorly. Once again, financial analysts brought up the poor performance of Black Desert Mobile. Converting the percentages of revenue by platform to actual won amounts shows why the analysts are so concerned. Doing so shows quarterly mobile game revenue has dropped by almost 50% since the first quarter of 2020. In contrast, PC-based revenue is up 14.6% over the same time.

While Pearl Abyss plans on launching EVE Echoes in China sometime during the second quarter, Black Desert Mobile doesn't really seem to have much on offer over the next few months. The Kunoichi class was introduced on 27 April. 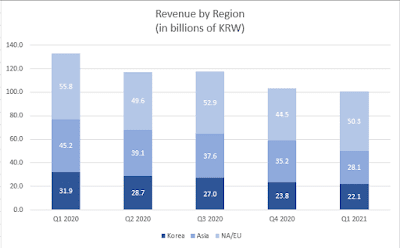 Performing the same calculations show Pearl Abyss' plan to increase revenue in North America and Europe by self-publishing Black Desert Online in those regions is working. Revenue for Q1 increased 13% compared to the final quarter of 2020. The region showing the biggest weakness for Pearl Abyss is Asia. Revenue from the region was down 20% quarter-over-quarter.

The final interesting part of the earnings call concerned upcoming games. Early on the call, Pearl Abyss mentioned CCP's London studio is working on a "sci-fi multiplayer shooter". No other information was disclosed. The other point of interest was when the release period for Crimson Desert was stated as "by 2022." The language change from stating definitively in Q4 2021 caused some concern among the analysts on the call. Pearl Abyss did mention the studio would provide more information on the game, including a release date, at events during the summer.