Yesterday Pearl Abyss hosted an investors' call covering the company's performance for the third quarter of 2021. For the first time since the first quarter of 2020 Pearl Abyss posted increased quarterly revenue. Unlike previous quarters, I won't dive deeply into the numbers as the call provided a significant look into the company's business plans going forward. The key phrases during the call were "play to earn", NFT, and the metaverse.

First though, a look at the present and recent past. Most of the news about the Black Desert IP concerned Black Desert Mobile. The executives on the call boasted of BDM utilizing AMD FSR technology. Pearl Abyss loves their graphics quality so I found an explanation of what AMD FSR adds to a game.

AMD Fidelity FX Super Resolution (FSR) is a type of rendering technique that looks to boost framerates in games and enable quality high-resolution gaming. It’s also a rival to Nvidia's DLSS, though the two differ quite a bit in how they function. FSR works by rendering frames at a lower resolution and then using an open-source spatial upscaling algorithm to make the game look as though it's running at a higher resolution. DLSS uses an AI algorithm to accomplish similar results, but it only works on Nvidia's RTX GPUs, some of the best graphics cards right now. FSR in contrast will work on just about any GPU — we've confirmed it runs even on Intel integrated graphics, for example.

Pearl Abyss also explained about the current activity leading up to launching Black Desert Mobile in China. Pre-registration for the game began in August with a focus group test completing in October. The game is currently undergoing a technical test to determine compatibility with the wide range of devices in China. The test is scheduled to end on Friday. 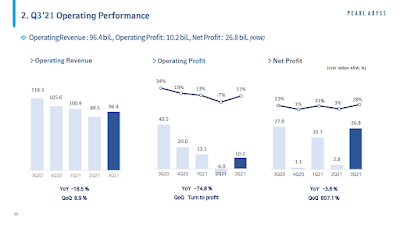 In the third quarter, Pearl Abyss revenue grew by 8.9% compared to the quarter before. After a quarter with an operation loss, PA returned to profitability with a ₩10.2 billion ($8.6 million) operating profit and ₩26.8 billion ($22.6 million) net profit. 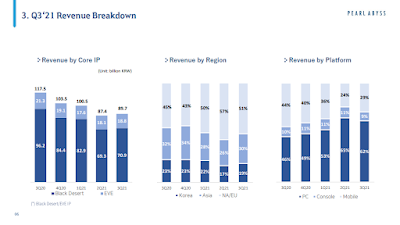 When looking at IP revenue, Black Desert experienced an increase of 2.3% in Q3, earning ₩70.9 billion ($59.8 million). Year-over-year, Black Desert revenue fell ₩25.3 billion ($21.4 million), or 26.3%.
The EVE IP did better, with revenue up 3.9% quarter-over-quarter, or ₩700 million ($591,000). Revenue was down YoY by ₩2.5 billion, or 11.7%. The EVE IP result was expected as in Q3 2020 not only did EVE Echoes launch, but the quarter was the first full quarter following the relaunch of EVE Online in China.
Now for the subjects Pearl Abyss seems to see as future drivers of revenue. The first is the concept of "play-to-earn". An analyst actually brought up the term and noted that EVE Online is a perfect platform for such a game. According to an article from CryptoPotato, play-to-earn is a business model where users play a game and earn cryptocurrency while doing it.

It’s [play-to-earn] a very powerful psychological model because it combines two activities that have been driving mankind since the dawn of time – making money and entertainment.
The key component in this model is to give gamers ownership over certain in-game assets and allow them to increase their value by playing the game actively. Usually, in the crypto world, defining the ownership and even transferring it is possible through the use of non-fungible tokens (NFTs).
We have an in-depth guide on what NFTs are, and you can check it here.
By taking part in the in-game economy, players create value for other players in the ecosystem and for the developers. In turn – they receive a reward in the form of potentially appreciating in-game assets. These assets can be absolutely anything ranging from appealing characters with variable scarcity to a certain type of cryptocurrencies.

From the definition of play-to-earn we get to the subject of NFTs (non-fungible tokens). Pearl Abyss will look for opportunities to introduce them in both Black Desert and EVE. The presentation pointed out that EVE's currently running Alliance Tournament is providing NFTs. In fact, EVE's tournament scene is Pearl Abyss' first effort to profit off of NFTs. The presentation disclosed to the analysts that Pearl Abyss is partnering with Tezos for this first effort.

Pearl Abyss told analysts that they had participated in blockchain technology since 2019. In discussing future plans, PA stated:

In the case of CCP Games, our subsidiary, as the currently ongoing alliance tournament, as a reward we have been offering cryptocurrency, and we are reviewing many diverse business opportunities. However, there are different regulations for different countries and these are vastly changing so we are going to be reviewing actively the related risks and we will be sharing with you our ongoing procedures.

The metaverse (a portmanteau of "meta-" and "universe") is a hypothesized iteration of the internet, supporting persistent online 3-D virtual environments through conventional personal computing, as well as virtual and augmented reality headsets. Metaverses, in some limited form, are already present on platforms like VRChat or video games like Second Life.

Current metaverse ambitions are centered on addressing technological limitations with modern virtual and augmented reality devices, as well as expanding the use of metaverse spaces to business, education, and retail applications. Numerous entertainment and social media companies have invested in metaverse-related research and development.

The metaverse has come to be criticised as a method of public relations building using a purely speculative, "over-hyped" concept based on existing technology. Information privacy and user addiction are concerns within the metaverse, stemming from current challenges facing the social media and video game industries as a whole.

With the versatility of the HyperModels, Hyperreal is unlocking a new expanse of opportunity for talent and brands.  HyperModels are interoperable across digital platforms including mobile, interactive applications, augmented reality, virtual reality, social media, and immersive screen displays. HyperModels also are capable of becoming “living” NFTs that are animated, adaptable and customizable.

"Hyperreal has proven its industry-leading expertise with its HyperModels, and we believe this strategic partnership will help provide a more immersive experience for our players in the Metaverse," said Kyle Kyungyub Kim, Head of Investment for Pearl Abyss.