Just because I have started playing World of Warcraft doesn't mean I have abandoned Eve Online.  Far from it.  I've been engaging in a grind for faction with Core Complexion, a Minmatar NPC corporation that is located throughout New Eden.  Rosewalker, my combat pilot, is up to 7.30, which means he will soon be able to acquire jump clones from the corp.  Wandering Rose, my industrial/economic pilot, is now up to 5.68, or just one more faction point away from having perfect refine in Core Complexion stations. 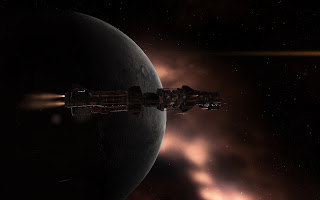 Last night I reached a milestone: 200 million isk.  That was the goal I set in order to buy Wandering Rose a new ship.  So I headed out to Rens and bought a Prowler.  This is a ship I've had my eye on since I first started thinking about running cargo through low-sec.  Okay, the ship has the lowest cargo capacity of the blockade runners, but does have two high slots which comes in handy when hauling in wormholes.  I've had that phobia about being in a wormhole without a probe launcher ever since that POS takedown I participated in when I was in Eve University.

I probably won't take my ship out for a week or two.  With Hulkageddon 3 starting, I don't want some trigger-happy ganker to mistake my ship for a mining hauler.