Three weeks ago Eve News 24 ran an article that created quite a stir titled "The Honey Botter Coalition – An exposé on Botting within Eve Online’s biggest Coalition."  The article is in keeping with Eve News 24's tradition of running botting and 3rd party RMT stories with an editorial bias that botting and 3rd party RMT is bad and players should not engage in those activities.  In EN24's latest effort riverini, Darius and Mino Noud made five charges:

2.  The HBC allows known botting corporations to operate in Tribal Band and that Tribal Band receives significant funding from botting activities.  Horus made a secondary accusation that TEST was receiving some of that income.

3.  One of the Tribal Band corporations contains a Questor bot developer.

4.  That a member of Pandemic Legion is involved in ISK selling and that he uses a PL jabber channel to conduct business.

5.  CCP is either unable or unwilling to ban the biggest botters and RMT operators in Eve Online.

Some in the Eve community believe this coverage is colored by an editorial bias against his in-game foes like Goonswarm Federation and Test Alliance Please Ignore.  So instead of coming out immediately and posting about the scandal, I took my time and did some research into the piece to try to discover whether EN24's critics or supporters were correct.

I came up with more information that I thought so I am dividing this latest look into botting at the alliance level into multiple sections.  This first part will look at the sources used in the EN24 article and the first two points concerning whether the leadership of the HBC tolerates botting and looks to violations of the EULA to help fund the coalition's activities.  The second part will look at the accusations of Tribal Band's involvement in large-scale botting operations.  The third part will examine the conflict that erupted between Eve News 24 and CCP Sreegs following the publication of the article.  The final installment will look at some areas that I think Eve News 24 can improve upon when covering issues like this in the future.


NOTE:  In the interest of full disclosure The Nosy Gamer was syndicated on Eve News 24 with articles appearing from 17 May 2012 to 4 January 2013.  The syndication deal ended on 6 January 2013.

Sources:  The main source for the story is a player referred to as Horus.  This player apparently has assumed many identities, from Krall Amarr to rmfHorus the diplomat in Dead Terrorists to A PUPPETMASTER as CEO of the TH3 UnTOuChaBl3S and a role in White Noise. to most recently playing a leadership role in The Jagged Alliance.  He is an admitted botter and RMT dealer and to many in the Eve community an extremely untrustworthy player.  Of course by definition those dealing in botting/RMT are not upstanding citizens so any direct information is going to come from a shady source.  But EN24 and Horus have a long relationship and Horus has served as the main source for the following stories in addition to the latest article:
The EN24 story did utilize secondary sources to confirm details of Horus' story but these other sources wished to remain anonymous.

Point 1 - Montolio asked Horus for ISK he knew was botted for The Jagged Alliance to remain in the HBC:  In response to the EN24 article Montolio published the following on the TEST forums.


I won't link the post here, but they have a post that involves logs with my name in it. I was not contacted for a response to the article or to fact check anything in the article - I must point out that TheMittani.com writers frequently contact me for comment. Anything you read on EN24 is one sided, not fact checked, and not researched. The logs are also doctored.

Anyways - the post involves me talking to rmf Horus asking him for ISK mostly. I can confirm I did ask him for ISK, but only to serve two purposes:

Nynjato was assisting with my scam, he can confirm my side. I was going to petition in the ISK and see what CCP let me keep out of it. But I never received any ISK because The Jagged Alliance collapsed a day or two before I could finish the scam.

With regards to turning in the information to CCP, I've been hunting and reporting rmf Horus actively since he attempted to take over Tribal Band shortly after the merger between 99/TASHA. Below is an email I sent to CCP after that event. 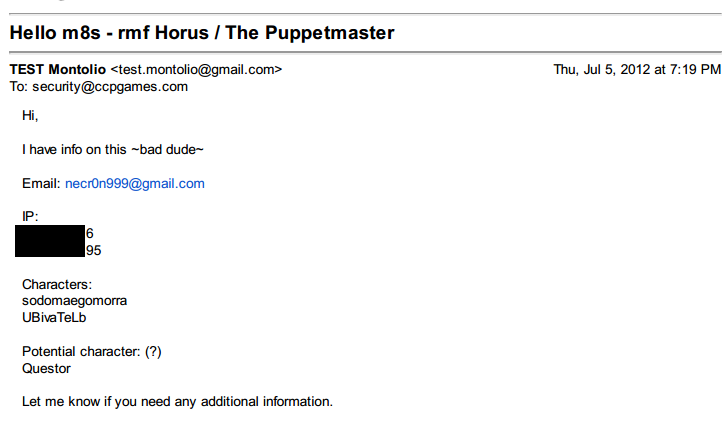 With regards to botting - our policy is that we don't enforce the CCP EULA in general. However we do frown upon any organized botting, when it is identified we shut it down. We've recently shut down a few such 'botting corporations' within our umbrella. I do not take part in RMT, botting, or anything else that violates the CCP EULA.

Montolio's response is interesting in several ways.  The first is the statement that the logs were doctored.  Is the doctoring referred to the missing colons in some of the chat published in the article?  That mystery appears the work of some sloppy editing on the part of the authors when cutting down the screen names of the participants of the conversation.  Or was something else doctored?

The second is that Montolio claims that he was never contacted by Eve News 24 for the article, yet we have responses to questions in the article.  As far as I know his response was always in the story.  Is he saying that the chat logs showing a conversation between Montolio and riverini were forged?

(UPDATE - 21 Jan 13:  I have now seen an image of the portion of the Google chat conversation between riverini and Montolio that appeared in the article.  It does not read exactly how the passage appeared in the EN24 article, but Montolio was contacted on 21 November 2012.  I intend to address this in part 4 of this series.)

Next is the statement that HBC has shut down "a few such 'botting corporations' within our umbrella" recently.  When did this occur?  What corporations were involved?  Was this in response to CCP Stillman's presentation at Fanfest?  And what exactly is meant by "shut down"?  That statement produced a lot more questions than answers.

Finally, the most curious statement of all is that he was attempting to scam Horus.  From reading the logs I thought the scam attempt was pretty obvious, but I don't know much about low null sec.  But if everything we read was an unsuccessful scam, why the bolded statement that the logs were doctored?

My conclusion is that the conversations between Horus and Montolio took place pretty much as recorded on Eve News 24 and that Montolio was indeed attempting to grab some of that dirty botted ISK.  The only question I have remaining is whether Montolio would indeed hand the money over to CCP.  I tried to contact Montolio to ask some of these questions but I did not receive a response.

Other stories in the series:
#2 - Analyzing The Honey Botter Expose - Blood and Sand