This Week's Rankings:  The rankings of the top twelve MMORPGs as determined by the players of the Xfire community from play on Sunday, 20 January 2013.  For more details about the methodology, click here.  Historical data can be found here.


Total MMORPG hours played Sunday: 101,286
The Xfire community continued its consistent interest in MMORPGs with the amount of hours played Sunday only decreasing by 0.4% compared to the previous week.  The games showing a surge of interest from the Xfire community were Tera (+25.0%) and APB: Reloaded (+13.2%) while the games showing the biggest drop-offs were Maple Story (-19.1%) and Metin 2 (-16.1%).

Examining An Expansion - With Eve Online's Retribution expansion receiving rave reviews among players now is a good time to compare the Xfire numbers vs. actual player numbers to see how well Xfire does in representing trends. 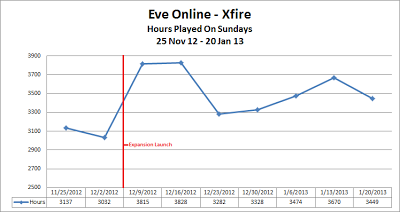 According to Xfire Eve Online experienced a huge jump right after the launch of Retribution and then interest dropped over Christmas and then slowly grew again.  Overall growth was good. 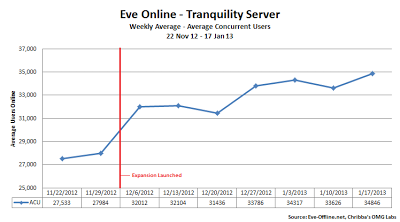 The reality of the monitoring of actual player behavior shows something a bit different.  Xfire was correct in catching the initial surge in player interest, a decline for a week, and then a gradual increase.  But the Xfire numbers did not show that activity in-game actually increased and is significantly higher than it was the first week after launch.
Does this mean that the Xfire numbers are useless?  Not at all.  Just use them to look at trends or as alerts that something possibly happened to a game.