CCP's War On Bots: The "Official" Price Of ISK

With the price of grey market ISK experiencing another jolt with the deployment of Odyssey 1.1 screwing up some bots, including Questor, I decided to put together a little chart. 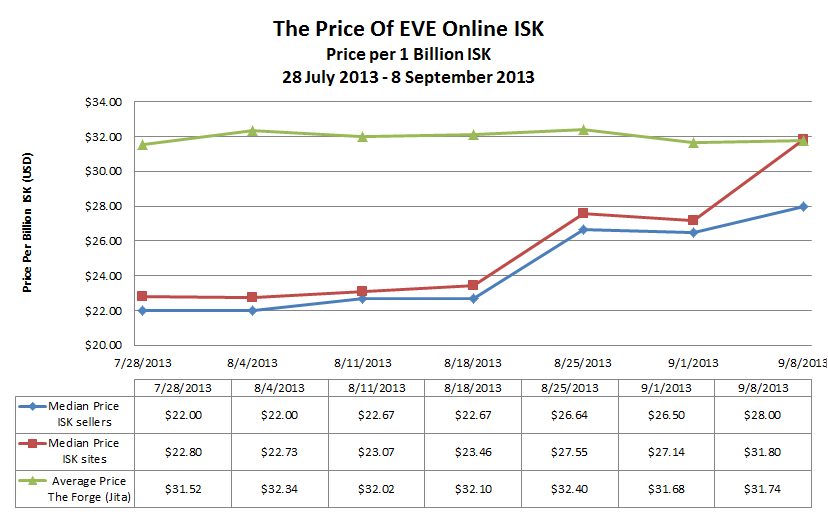 Something about the data bothered me.  Not the data about the ISK sellers.  The reason for the difference is that one of the ISK sellers maintains three websites and plays around with its prices.  My problem involves the price listed for The Forge.

The calculation itself is pretty simple.  Go to the history table in the market interface for The Forge, pull out the average price for the day, and then calculate how much 1 billion ISK would cost in real world U.S. dollars if I purchase multiple PLEX.  The cost of one PLEX is $19.99 and two is $34.99.

But that is U.S. dollars.  What about in other currencies like the Euro or Pound Sterling?  The price, when converting the main European currencies to U.S. dollars shows that purchasing PLEX from the CCP website and converting to ISK just doesn't give a good value.  On Sunday the price for someone in the UK was $42.51/billion and someone living in the Euro Zone $41.83.  So grey market ISK is still cost effective for those living in the EU, right?

Perhaps if CCP were the only outlet available to purchase PLEX.  But players have the option to buy EVE time codes from 3rd party sites.  CCP has helpfully provided a page of sites that sell EVE time codes.  From what I can tell as long as players can purchase products in another currency they can buy from anyone anywhere.  So a person who would pay CCP €34.99 for 2 PLEX can instead pay EVE Time Codes or BattleClinic Deep Space Supply $34.99 for a 60-day ETC instead.1

The presence of all the ETC sellers does make the calculation of an official price more difficult.  Just from the list on CCP's website a player can purchase time codes in U.S. dollars, Russian rubles, Polish Zloty, Czech Koruna, and a German site even sells in Euros.  I saw the price offered by Sinclair Software was €30.49 instead of €34.99, which is a nice discount.  Competition between the sites means that players can obtain cheaper prices that my "official" calculation.  For example, EVE Time Codes gives out a 60-day time code once a player buys 14.  Another example is the Russian website Direct COD is selling 60-day time codes for 999 rubles where the official price is 1049.

So for the sake of simplicity, I'll continue listing the"official" price of ISK in U.S. dollars.  Not only can players avoid the VAT charged to those living in the European Union, but the U.S. dollar is the weakest of the major currencies so those living in the EU get the most bang for their euro or pound.2  Just remember that savvy shoppers can get a better value and they don't need to dip into the grey market to do so.

1)  I won't link to the individual companies because the prices vary depending if a site is running a promotion.  If interested, go to CCP's EVE Time Code Retailers page and get the latest link.

2) If anyone has a link to historical data going back more than a year on U.S. currency rates compared to the euro and pound sterling, could you please drop it in the comments?  I know that the difference in price between what those in North America and the European Union is greater than the cost of the VAT; I just didn't have the data needed to include the reasoning.
Posted by NoizyGamer at 8:31 AM