The Math Behind The Grind

For the last five weeks I've worked on raising my standings with the Minmatar in order to get a 2-run blueprint copy for a Tempest Fleet Issue battleship.  Last night I hit 9.75 (9.68 unmodified), or just 0.15 away.  Almost there, right?  Not really.


I'm all out of tricks.  No more COSMOS missions and no more tag turn ins.  At this point, even doing the level 1 Sisters of EVE epic arc mission is not attractive.  The arc takes a lot longer than I need to do the 32 regular missions to get 2 storyline missions.  The 8.75% faction gain just isn't worth the time investment.  The level 4 mission, which gives me a 12.5% faction standings boost since I have Social trained to 5, is worth doing because of all the ISK I received in addition to the standings.

The experienced missioner is probably thinking I'm nuts as 8.75% gain is pretty big.  But not when approaching the 9.9 needed to obtain the blueprint copy.  Taking that much time for only a 8.75% increase just isn't time efficient.  Let's look at the math.  First, what unmodified standing do I need to possess to have a modified standing of 9.9 with the Minmatar?  The formula as listed in the Evelopedia is...

Since my connections level is 5 and the effective standing I'm trying to achieve is 9.9, the unmodified standings I need to achieve is 9.875, or 9.88.  At this point, the Social skill only gives me a bonus of .02 to my standings.  But that's nothing to sneeze at given the difficulty of gaining standings at this level.

The security storyline missions give the greatest faction gain at 9.375% with the Social skill trained to 5.  How much will I gain if my next storyline mission is a security mission?  The formula for the standing increase is...

According to the math, if my next storyline mission is a security mission, my unmodified faction standing will rise from 9.68 to 9.71 and the modified faction standing will rise from 9.75 to 9.77.  So for running 16 regular missions and 1 storyline mission, my standings will rise .02.  I did a little more math and found out that if I could just manage to get security missions from my storyline agent I'd only have to complete 10 more missions to get the faction needed for the BPC. 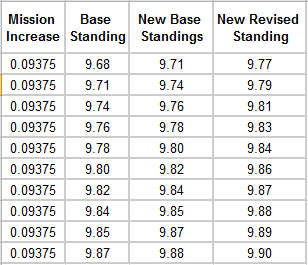 Managing to draw 10 security storyline missions in 11 months?  I don't even need 10 as I can do the level 4 epic arc mission 3 more times before my self-imposed deadline.  With a standings increase percentage of 12.5% that would knock the number of missions down to 7 or even 6.  So unless I get distracted by something shiny or run into an epic string of bad luck I should have this goal completed by next August.  With any type of good luck at all I could have my BPC by the end of the year.
Posted by NoizyGamer at 8:28 AM