Last week I posted an article discussing the possibility of terrorists using virtual world like Second Life and World of Warcraft to launder money.  I think that some people were shocked at the size of the estimated value of $2 billion1 of both the primary and secondary RMT markets in 2007.  A question that came up was: how much does EVE Online ISK contribute to the illicit secondary RMT market?

I don't think anyone really has a good estimate on the size of the secondary RMT market, both for EVE Online and as a whole.  However, I do know of a website, PlayerAuctions.com, that facilitates the trading of virtual currency for real world money.  The site was referenced in an academic paper about gold farming and RMT written in 2009 so the site has operated for at least four years. 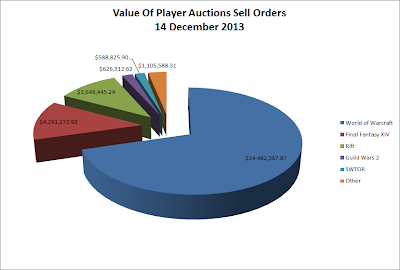 I conducted a survey of the amount of virtual currency for sale on Saturday, 14 December 2013.  I found auctions for 46 games2 totaling $34.7 million.3  Only three games, World of Warcraft, Final Fantasy XIV: A Realm Reborn, and RIFT had more than $1 million worth of currency for sale.  Two other games, Guild Wars 2 and Star Wars: The Old Republic, had currency worth more than 1% of the market for sale.

So what about the other 41 games?  How much was for sale for each game?  I have a Google document with all the games listed for those curious.  The top 10 games in the "Other" category are:


So where is EVE?  The game ranked 16th with a sell value of $26,040.  That represented 0.07% of the value of the virtual currency for sale on PlayerAuctions.com. To compare that amount to the primary RMT market in EVE Online, the 1.82 trillion ISK in sell orders on PlayerAuctions.com almost matched the 1.84 trillion ISK that was spent purchasing PLEX in EVE Online's main trade hub of Jita on 14 December.

Is the activity on PlayerAuctions.com representative of the secondary RMT market as a whole?  Probably not.  But the site is a major player.  How big?  That will involve making an educated guess on the inventory turnover on the site.  Inventory turnover is a measure of the number of times inventory is sold or used in a time period such as a year.  I have to imagine that the inventory turnover on PlayerAuctions.com is at least once a month.  That would mean that over $400 million worth of virtual currency is sold each year on the site.

But based on my observations so far of EVE Online ISK, the inventory turnover is possibly as high as 4 times a month.  Virtual currency is a very perishable commodity as games companies could seize the stock at any time so the dealers in illicit RMT have every motivation to sell the currency cheaply and move it out of their hands as fast as possible.  In order to stay conservative, I would guess at a turnover in the value of the virtual currency of 15 days.  That would result in an estimated value passing through PlayerAuctions.com of $800 million.  To play it safer, I would round the estimate to between $500 million to $750 million in sales per year.

I should add a caveat.  The above estimate is known as a WAG - Wild Ass Guess.  Basing this estimate on a one day snapshot is a very sketchy proposition.  If I wanted to come up with a better estimate I would need to take a lot of samples in order to get a better picture of the market.  But I think I can safely say that the site is the home of hundreds of millions of dollars in illicit RMT per year.

This analysis does not include the commercial sites and all the individual players who sell in-game currency on scattered forums throughout the world.  Also, PlayerAuctions.com does not encompass the Asian market.  Trying to derive the total market value of the secondary RMT market based on PlayerAuctions.com alone will not produce a viable result.

3.  The value was calculated using the lowest sales price for the game or, in the cases of games with multiple shards, with the average of the lowest prices on each shard.
Posted by NoizyGamer at 7:00 AM