I regularly listen to BigCountry's talk show on Wednesday mornings (Tuesday nights in the USTZ) and have listened to the complaints about the rise in the cost of PLEX.  The conversation is amusing, but I haven't felt compelled to write about the subject until EVE News 24 published a piece by Dirk MacGirk, a regular on BigCountry's show.  A very interesting read, but he completely ignored the primary purpose of PLEX: fighting illicit ISK sellers.

PLEX, the 30 Days Pilot's License Extension, is an in game item that players can turn in for 30 days of game time.  Since the introduction of PLEX in November 2008 to formalize the game time code for ISK trading that began on the official forums back in 2006, CCP have allowed players to use PLEX to fund other things like Fanfest tickets, character transfers between accounts, and the training of multiple characters on an account.  In a dev blog back in August 2009, CCP Grimmi made the following point about PLEX:


"One of the greatest thing about PLEXes is that they offer a way to stamp out unauthorized RMT elements trying to infiltrate the EVE community and hacking players accounts.  Buying ISK from unauthorized ISK sellers has serious consequences, as many players have discovered recently when they've had the ISK they bought removed as it had come from hacked accounts. It hurts, but not as much as having your account(s) hacked and cleaned out of ISK and assets, I assure you.

"The way of the PLEX benefits everyone involved. The very serious effects of the ISK seller rabble on EVE are limited. Your money is channeled into making EVE more awesome rather than ruining it. Players can use their ISK to play the game and save up their hard-earned RL moolah to buy that display card of OMGness they always wanted instead, for example.

"In short, everybody wins. Everybody, except the account hacking, credit card stealing and macroing ISK sellers, that is.  PLEX is a part of a two pronged attack in order to curb RMT in EVE.  The second part involves actions such as account banning, item confiscation and ISK reversals.  More on that next week when we will report to you on operation 'Unholy rage'."


CCP's battle against the ISK sellers relies on Team Security and InfoSec cutting into the supply of ISK available for sale.  Team Security does this by tracking down botters and the ISK sellers themselves while InfoSec safeguards players' accounts from hackers and phishing attempts.  These efforts produce gales of laughter from players when the tears of botters somehow make it from botting forums to the general public.  But the purpose of the effort is serious.  Decreasing the supply of available ISK drives up the price of ISK on the secondary ISK markets.

The website MMOBUX, which keeps track of gold selling sites, including collecting reviews, published an article in the summer of 2012 examining the price of EVE ISK from 2007-2011.  The article was of interest because it examined the price of ISK before the creation of a permanent anti-RMT team (Team Security) that began a full-time war on botters in February 2012.

One other item of note from the article.  According to the author, during this period the price of ISK was decreasing naturally at about a 14% rate per year.  I should note that I used to follow the median price of ISK listed by MMOBUX until I created my own index of sites.  According to my notes, the median price of 1 billion ISK on 28 October 2012 was $22 USD.  Yesterday, the median price for the 18 ISK sellers listed on MMOBUX was $23.92, a rise of 8.7% over the past 18 months.  From that, I would say that Team Security is having an effect on the supply of ISK available on the illicit ISK sites.

But as we saw with Unholy Rage, CCP also needs to establish a ceiling low enough that the ISK sellers can't make money.  If the business takes too much effort for too little profit, the ISK sellers will move on to greener pastures.  To lower the ceiling, CCP needed to increase the ISK cost of a PLEX.  The higher the ISK cost, the lower the real money cost.  The table to the left shows the various ISK to USD conversions.

CCP can lower the ceiling by giving players reasons to purchase and spend all of the excess ISK on the market.  How?  By doing everything Dirk said was bad to do in his EN24 article.   Character transfers, Fanfest tickets, multiple character training, custom ship skins.  That demand that Dirk railed against is the demand that is affecting the ISK sellers by driving down the prices they can charge for ISK.

As an example, compare the price of ISK in Jita 4-4 yesterday (16 April) with the median price offered by the sites listed on MMOBUX.  The average price of a PLEX was 719 million ISK.  That converts to $24.33 USD per billion ISK.  Only 41 cents more than the median price of $23.92/billion on MMOBUX.  More importantly, that means that half of the 18 ISK sellers are charging more than a player would pay by going through CCP (or purchasing EVE Time Codes from an authorized reseller).  The ceiling is already set low, and any major disruption in the supply of ISK could result in a site not selling any ISK for a few weeks.  Some sites have experienced this already and stopped selling ISK.

But CCP doesn't just have to worry about the big gold selling sites that deal with multiple games.  They also need to worry about the larger sellers who hang around various forums and sites like Player Auctions.  Is the rise in the ISK price of PLEX having an effect on them?  I think so. 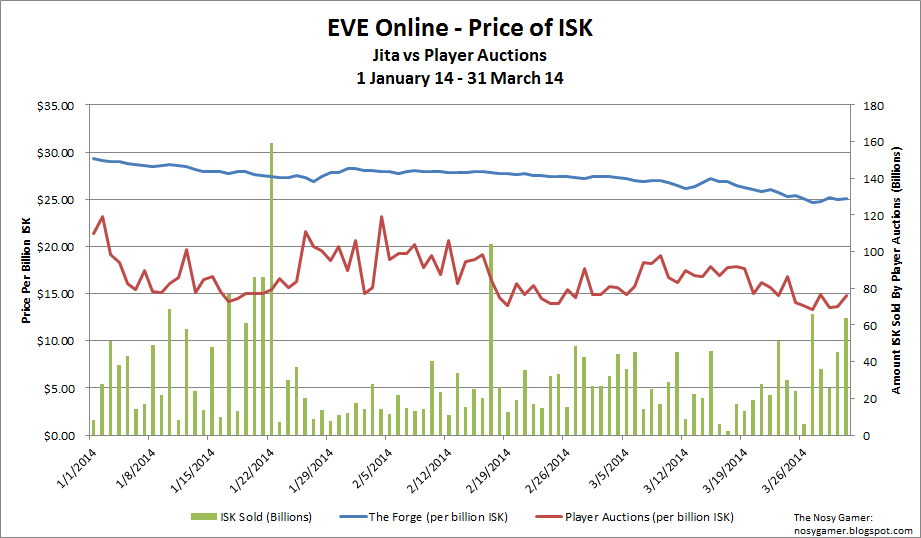 The chart above contains information of what players actually paid for ISK, not the price that ISK sellers were offering, for the first quarter of 2014.  After the battle of HED-GP the amount of cheap ISK for sale on Player Auctions vanished.  Sales dropped for about three weeks until sellers with cheaper ISK showed back up.  For those wondering, that period included the battle of B-R5RB and its aftermath.  If players were RMTing to replace losses in the most costly battle in video game history, they weren't doing so at Player Auctions.

If CCP can increase the demand for PLEX even higher, then pressure will build on ISK sellers to drop their prices further.  If CCP can maintain the pressure long enough, more ISK sellers will give EVE up as a lost cause and hit the new games like Elder Scrolls Online and Wildstar.  If enough sellers leave the market, then the botters and hackers that supply the illicit RMT sellers will follow.  Not all of them, as some dead-enders will always stick around, but enough so that EVE becomes a better place to play.
Posted by NoizyGamer at 6:00 AM