The latest security dev blog is making some people take another (or perhaps first) look at the secondary RMT market1 in EVE.  The graph included by CCP Bugartist sparked some posts in the comments thread that contain a question I've read in the comments for some of my own articles.

Namely, how much illicit RMT goes on in EVE Online?  No one really knows.  Some claim that CCP turns a blind eye to illicit RMT, claiming that the company ultimately profits from the practice.  Given CCP's history, from its decision in 20062 to allow a company owned by a major figure in the secondary RMT markets3 to become an authorized Eve Time Code seller, to last November's revelation concerning SOMERblink and other EVE player-run gambling sites using a loophole in the GTC resellers agreement to launder ISK4, that some EVE players have a freighter's cargo hold worth of skepticism concerning CCP's efforts in fighting the illicit RMT trade is understandable.

After watching and chronicling CCP's efforts for the past 3 years, I am not one of those players.  However, I don't want to see Team Security rest on its laurels and backslide from its currently successful Forever War against botters and the illicit RMT merchants either.  So since CCP has published its figures, I have some from the only source I know where I can get my own data of ISK sales: Player Auctions.

Back in mid-December I published my first analysis of the sell orders on Player Auctions for all games.  While the top 5 games remained the same, the order changed just a bit. 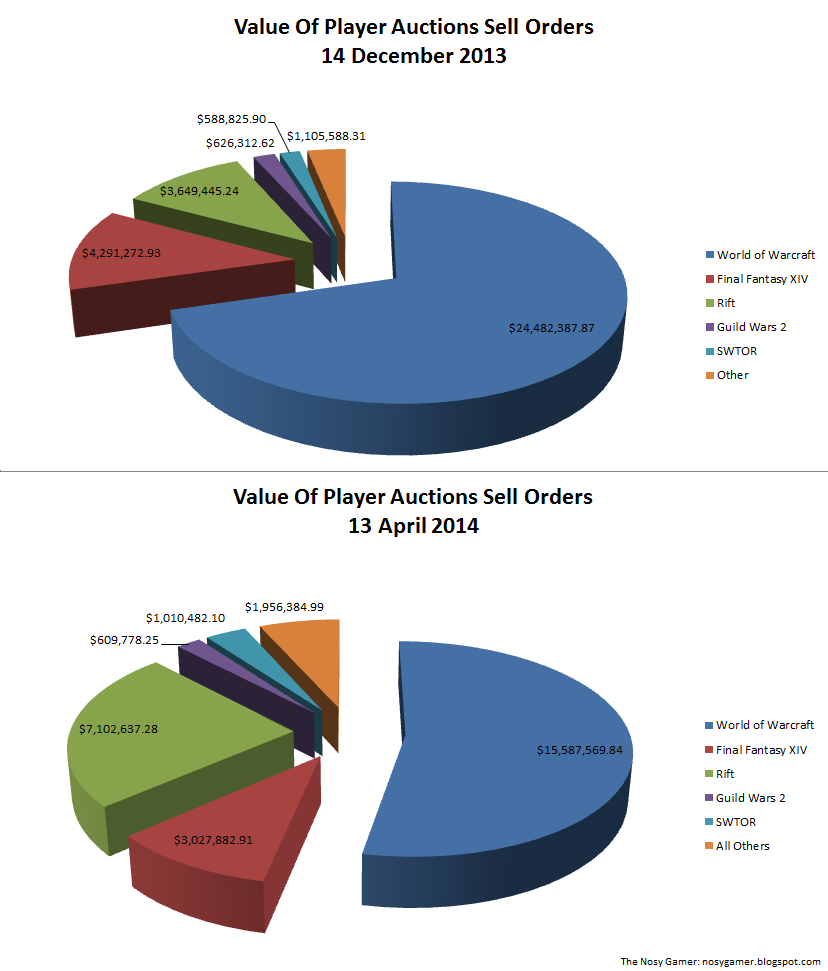 Over time, however, I discovered that just relying on the value of the sell orders is not a reliable way of determining activity.  Player Auctions has a feedback system and I discovered that many of the vendors on the site would receive complaints from buyers because the seller did not have product in stock.  Also, some of the amounts did not pass the smell test of what an ISK seller would have in-stock.


For example, take the list of ISK sellers from yesterday.  The amount of ISK for sale rose from 1.8 trillion ISK on 14 December to 16.3 trillion ISK yesterday.  Does that mean that ISK sales have exploded?  Hardly.

Taking a look at the list, one of the sellers advertises 9 trillion ISK for sale.  A second has a sell order for 5 trillion.  Sorry, those don't pass the smell test as actual amounts the sellers have in stock.  The three sell orders that ask for more money than a player would spend by buying an EVE Time Code and selling the PLEX in Jita total another 980 billion ISK.  Another seller has had perhaps 1 sale in which CCP did not immediately confiscate the ISK or PLEX sold in the last 3 months.  That's another 200 billion ISK.  Subtract all those amounts, add in that the price in December was $14.30 and the price yesterday was $17.00, and we get back to a total similar to that found in mid-December.

So since I know of no easy way to get the information on whether sales were increasing or decreasing on Player Auctions, I decided to attempt to track the sales of ISK of each seller for the first quarter of 20145.  To do so required visiting Player Auctions each day and recording the sales.  I identified a total of 67 sellers, although I image I missed a few that only hopped on and sold their ISK in less than a day.

Over the course of the first three months of 2014, stores on Player Auctions sold 2.74 trillion ISK for a total of almost $44,500 USD.  During the same time, CCP seized 4.62 trillion ISK from all RMTers, both buyers and sellers.  The amount of ISK seized does raise a question.  Player Auctions is a pretty big operation.  Are the regular ISK selling web sites and other forum operations really selling that much ISK, or is CCP doing a good job of seizing ISK before the RMTers can sell it?  Another question that springs to mind is whether the amount includes ships from bot farms seized or does the figure represent pure ISK?  Some of the botting RMTers are showing signs of frustration and CCP seizes a lot of botting ships.  I have to imagine that replacing 20 botting Tengus due to CCP detecting and banning a bot farm has to hurt somewhat.

I'm sure now that everyone knows I have the data that people have additional questions.  I'm still sifting though the data and will write at least one additional blog post on the subject.  But since CCP came out with a security dev blog, I thought I'd try to answer one of the questions people were asking.  I don't know the true answer, but I haven't seen anyone else come out with better additional data outside of CCP.

1.  The term "secondary RMT market" is a term for those who sell ISK outside CCP-sanctioned processes.  An example of buying ISK on the primary market is purchasing a PLEX from CCP and then selling the PLEX in Jita.

2.  I was only able to document 2006 based on information found on the EVE Online forums.  The actual agreement could have occurred in 2005.

3.  The figure, Marcus Eikenberry, publicly forgo all methods of making money that would violate the EULA/ToS of any game in February, 2010.