Now Kotaku Is In Bed With Botters and RMTers

The GamerGate controversy started off with a games journalist sleeping with an indie game developer.  That morphed into a scandal in which gamers began questioning the integrity of games journalism in general.  I won't go into the details, but a segment of games journalists were staggering until the recent controversy involving the release of a new game, Middle-Earth: Shadows of Mordor.  YouTube, which many gamers are granting more credibility than the gaming web sites, now had its own ethical issues to deal with.  Mainly, that in order to get a pre-release copy of the game, YouTubers had to do some questionable things.

Interestingly, Kotaku chose to have Nathan Grayson, a journalist at the center of the sex scandal, write an article about the new scandal.  But as Kotaku moved to take the high ground, they decided to step on one of my main concerns: botting and RMT. 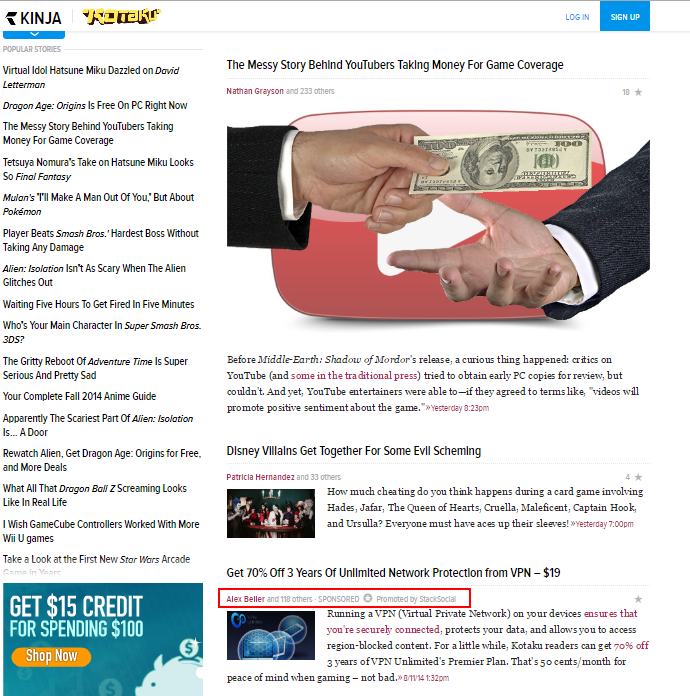 Two stories down from the Shadows of Mordor/YouTube story was a "sponsored article."  This type of native advertising is designed to look like a regular piece of content on a website.  If one isn't careful, a reader could believe that the story is a legitimate feature and not advertising.  Yes, that's right, that "story" is actually a paid ad.

The ad is for a company selling VPN access.  Now, those familiar with botting, hacking, and conducting illicit RMT know how useful a VPN is in avoiding detection by game companies.  I wrote a post about CCP's automatic hardware ban system designed to detect banned players from obtaining new accounts.  The botter in my post reported the only way he got around the system was using a VPN.  But CCP, according to botters, started effectively targeting botters using VPN, which led to a greater acceptance of a program called Red Guard.

The Kotaku article made a direct pitch to people that MMO companies really don't want in their games:

"If you're a gamer, hacker, or just Internet power user, you know how important security is online. For about 50 cents/month, you can connect to WiFi securely, anywhere." [emphasis mine]


The highlighted sentence is a not very subtle hint that the service is perfect for Chinese gold farmers and sellers, isn't it?  I know that people get upset with TheMittani.com or EVE News 24 if an RMT ad appears on their sites.  But that's usually a problem with the advertising software like Google Ads not filtering out the offensive content.  That native advertising article that appeared on Kotaku is not a mistake.  Someone at Kotaku made a deliberate decision to take the money for that disguised ad for a shady company.

Now, I'm not naive.  I know that the people who are going to bot, hack, and sell in-game currency in on-line games are going to find services to help hide from the game companies.  That's why I went ahead and linked the article; not linking the article would not help prevent these activities from happening.  But what I can do is point out how Kotaku is accepting money from a company that provides a service that can harm the game experience of on-line gamers.
Posted by NoizyGamer at 6:00 AM