RMT In Null Sec This Week

Over the past two days information has emerged concerning illicit RMT activites in null sec.  I'm not really surprised that information like this would leak out.  In the past I've posted about corps or alliances renting space in null sec as well as an illicit RMTer named elusif who was kicked out of the Goons' comms for advertising his goods.  So I figure I need to at least mention the latest allegations that, for a change, I didn't dig up on my own.


On Tuesday, EVE News 24 published a story alleging that the big rental empires condoned botting.  Here is an excerpt:


"As most of you do, I have alts. Most people have alts for mining or hauling or a specific specialty for pvping. I have alts for seeing and listening and I like to get very familiar with various groups in Eve. I even like to get familiar with the renter alliances and the people who run them. I’ve had alts in BoT, NAdot, and Greater Western. Agreements were made specifically out of Eve and a familiar and common question was always asked.

"'Are you planning on botting?' Now the first time I thought this would be a warning NOT to do that. But the thing said afterward left no ambiguity to the situation: 'Because if you are, such and such system would be better suited.' And 'No point paying for a piece of pie you can’t finish.'

"So for those who haven’t caught what this person was throwing, they’re asking if I’m planning to use bots to rat and if so suggesting a more expensive system. And if I do not plan on using bots, there’s no point in me paying for such a system."

EN24 has done a lot of good reporting on botting and RMT in the past.  In fact, the stories I read on EN24 are what got me interested in botting and RMT to begin with.  The only thing that has me concerned about this story is the lack of chat logs.  In the past, the stories always had chat logs with the botters and RMTers.  Tuesday's story didn't.  Would I believe that such conversations occurred?  Absolutely.  But I'd need more proof before I start jumping up and down.  I don't want to fall victim to confirmation bias.  Let's just say I have another reason to hope that the upcoming jump drive nerfs may make rental empires a thing of the past.
The second story emerged from a leak on the Failheap Challenge forums made by a former member of Clockwork Pineapple, an alliance based out of Syndicate.  The player, who goes by Duckslayer on the Failheap Challenge forums, posted a link to a zipped file containing some forum pages documenting the transactions.  I am inclined to believe he actually downloaded the pages.  Duckslayer didn't just provide screenshots.  He saved all the files associated with each forum page, images and all.  I should add that the activities of the RMTer, A Rose Pedalar, ended in July. 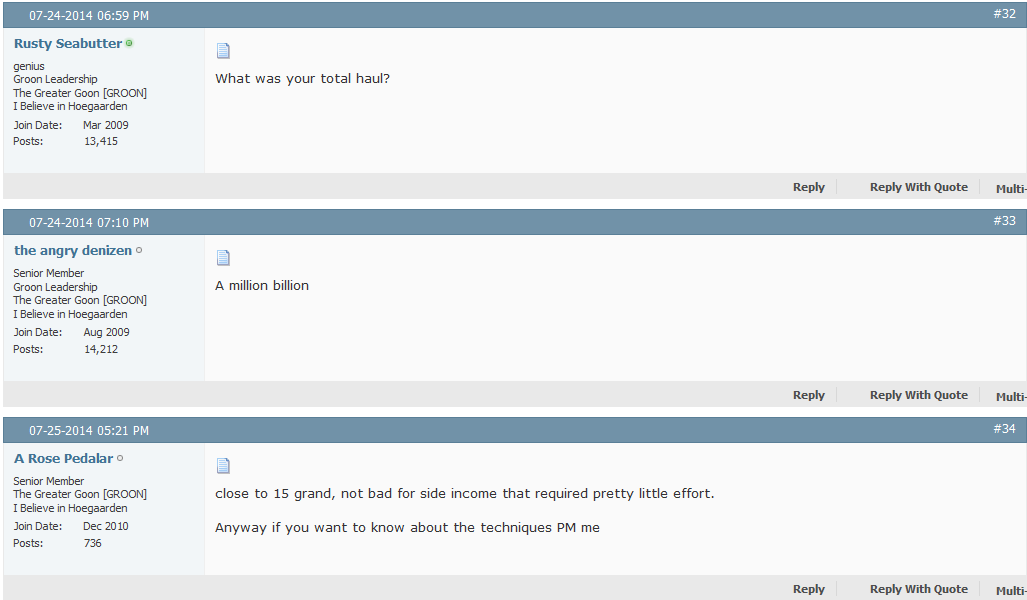 Over a three year period A Rose Pedalar pulled in almost $15,000 USD.  Digging through the contents of the zip file, I found that A Rose Pedalar was an ISK seller who catered almost exclusively to members of his alliance.

A guy like this who limits who he conducts business with is pretty hard to catch.  Especially since the record shows he would only sell sporadically.  I'm just surprised that an alliance would allow someone to transact business like this on their own forums.  Then again, why not?  If the forum names don't link back to a character, what is CCP going to do, even if they want to take action?

Now, the Clockwork Pineapple story is possibly a troll.  Also, the RMT activity ended about three months ago.  But if true I can add this to my list of examples of null sec alliances recruiting botters.
Posted by NoizyGamer at 6:03 AM