Is World Of Warcraft Turning To PLEX?

One story to watch in 2015 is whether World of Warcraft adopts CCP's PLEX model of allowing players to pay for their monthly subscription with in-game currency.  WoW community manager Bashiok indicated that Blizzard is moving in that direction.  In a post on the WoW forums, he wrote:


"We’re exploring the possibility of giving players a way to buy tradable game-time tokens for the purpose of exchanging them in-game with other players for gold. Our current thought on this is that it would give players a way to use their surplus gold to cover some of their subscription cost, while giving players who might have less play time an option for acquiring gold from other players through a legit and secure system. A few other online games offer a similar option, and players have suggested that they’d be interested in seeing something along those lines in WoW. We agree it could be a good fit for the game, and we look forward to any feedback you have as we continue to look into this feature."

Instituting a PLEX-type payment model potentially could net Activision/Blizzard millions of dollars every year.  As an analysis on the Player Auctions website showed last December, the vast majority of RMT sellers look to sell WoW gold.  A pretty obvious conclusion considering that no other MMORPG in the western market comes close to WoW's over 10 million subscribers, but the amounts involved are enormous.  When looking at sales on the site yesterday, I noticed one seller in a half-day had over 3.5 million gold in sales recorded.  The total real cash earned from those sales was in the neighborhood of $2,500 - $3,000.  In comparison, sales of EVE Online ISK on Player Auctions typically result in all sellers earning between $10,000 - $12,000 per month.

Speculation is that if Blizzard institutes a PLEX system that the move would cripple gold sellers.  But would it?  Perhaps in the long run.  But gold sellers could have lighter wallets very quickly if the EVE experience is any indicator.  The RMT website MMOBUX performed an analysis on the price of ISK on the secondary RMT market between 2007 and 2011 and found a dramtic drop in the price of ISK associated with CCP allowing the trade of game time codes for ISK on the EVE Online fourms.

The price continued to drop until CCP began taking enforcement steps, the most noticeable on MMOBUX's chart Unholy Rage that occurred in June 2009.  But CCP continues its War on Bots, ratcheting up the pressure on those engaged in RMT to the extent that currently only of of the sellers listed on MMOBUX as selling ISK offers a price competitive with just going to CCP's website, buying a PLEX, and selling it in Jita, the game's main trade hub.  The combination of PLEX driving the price down and Team Security driving the price up through creating a limited supply of ISK eventually made ISK selling unprofitable for most of the websites, although buyers can find ISK to buy in other places.

Of course, the price of gold does not have to drop.  The experience in Runescape shows that prices actually rose.  Over the first 6 months of the existence of Jagex's PLEX-type object, the bond, the price offered by an index of websites I monitored showed that the price of in-game currency rose from $0.41 per million coins to $0.50 per million. 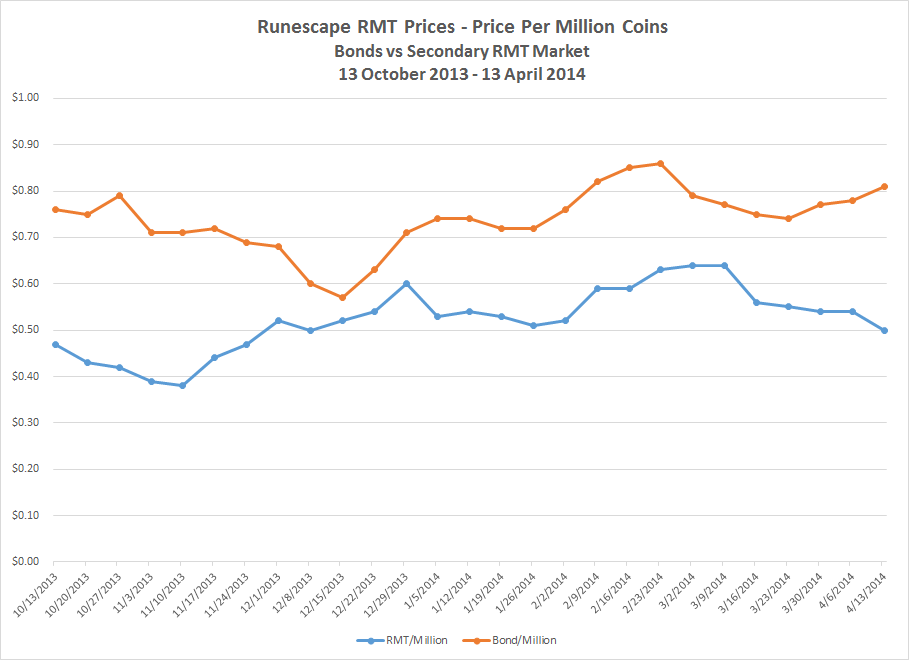 One big difference between CCP's introduction of PLEX and Jagex's introduction of bonds is enforcement.  PLEX were introduced in the Quantum Rise expansion in November 2008 but serious enforcement didn't really begin until the Unholy Rage operation began in June 2009.  Jagex, on the other hand, has waged an aggressive, although sometimes ineffective, war against bots and RMT for a long time, famously banning 9.2 million accounts for botting and RMT in 2011.

As both CCP and Jagex discovered, just implementing PLEX or just aggressively banning botters doesn't work.  Combating the scourge of illicit RMT in MMORPGs requires a coordinated plan that incentivizes players to not go to shady websites while at the same time works to reduce the profits of those engaged in RMT.  PLEX is not a quick fix for the problem of illicit RMT.  How Blizzard handles the situation in WoW is one of the stories to watch in 2015.

Posted by NoizyGamer at 8:39 AM