The Casino War: Fade And Tenal

I realize I am bad at EVE. If I were good, I would chime in on the controversy over what to call the current war now underway in the galactic north. Instead, I have my head buried in Dotlan maps and the current situation. Today's selections comes from Fade and Tenal. 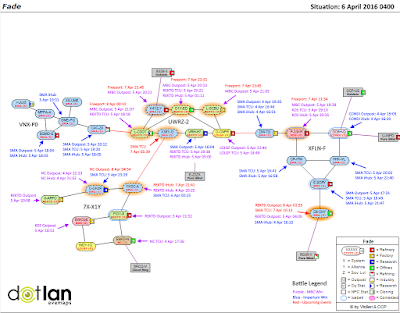 First, the situation in Fade. After Sunday's drubbing, I wondered how the Imperium, especially SpaceMonkey's Alliance, would fare. Over the past 48 hours, they split the events 22-22. Better than losing 20-2 as happened Sunday, but that still meant that the Money Badger Coalition continued its march toward Deklein.

In the constellation of 7X-X1Y, the MBC finally took firm control, with SMA left holding only 2 TCUs at the end of yesterday's fighting. The MBC, particularly Pandemic Horde, streamed into the UWRZ-2 and freeported 4 stations in the constellation. Including the outpost in P-33KR, capture event for 5 stations will begin between 21:34 on 7 April through 00:10 on 8 April. Everyone could wake up Friday morning with the MBC sitting on Deklein's doorstep in a very strong position. 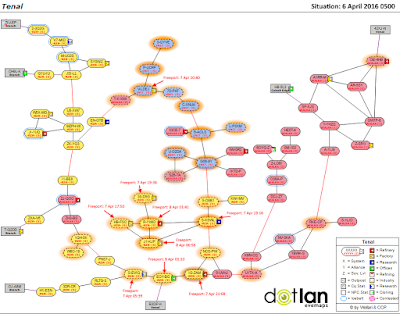 The situation in Tenal is a lot worse for The Imperium, assuming the region wasn't outright abandoned. The Initiative. moved to Syndicate and the DRONE WALKERS may take the remaining INIT. space in the next couple of days. RAZOR Alliance's holdings will take longer to swallow and digest. DRONE WALKERS, however, have switched to a strategy of capturing stations first. Currently, they have 9 stations freeported in Tenal. I guess they want to make sure anyone who attempts to come back and harass them will not have a station to base out of.

I know I should look at the situation involving Tactical Narcotics Team in Tribute, but I'll let Wilhelm tell that story.
Posted by NoizyGamer at 6:00 AM