On Monday, Tiberius Stargazer wrote an article on Eve News 24 describing a group of Russians, the Drone Walkers, who jumped into the war by invading the Imperium held region of  Tenal. Judging by the group's progress over the past 4-5 days, the Drone Walkers plan to knock The Initiative. out of the war early. 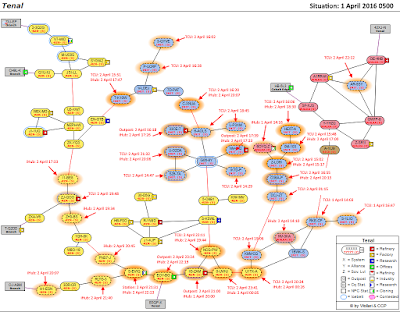 If the numbers in Tiberius' article are accurate, the Drone Walkers have numerical superiority in the region of over 2 to 1. As the map above shows, the Russians are pressing that advantage, threatening to seize most of The Initiative.'s space over the weekend.

I did notice one additional crazy Russian fact about the war. Legion of xXDeathXx currently controls the territorial control unit in E-SCTX in Vale of the Silent. My understanding up until now is that Legion of xXDeathXx planned on staying out of the war. We know that the MoneyBadger Coalition, Low Sec Voltran, and all the other ad hoc groups that merged together would not stay together after the current fighting against the Imperium. Have the Russians made a deal with the anti-Imperium forces to take over parts of Vale of the Silent? Inquiring minds would like to know.
Posted by NoizyGamer at 6:00 AM