As the implementation of delayed local in null sec, otherwise known as The Blackout, is in its second month, now is a good time to take a quick look at the monthly security report for July. 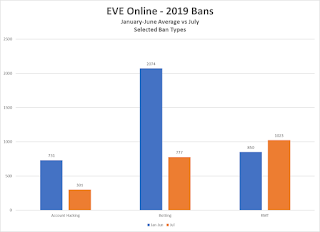 In preparation for appearing on Talking in Stations yesterday, I created a graph to show the amount of July bans compared to the monthly average for the first half of 2019. The raw numbers provided in the dev blog went pretty much as expected.

In the category of account hacking, the 58.8% decline in accounts CCP locked down because of hacking declined 58.8% in July compared to the average for the first half. CCP spent time during the first half of 2019 providing tools to help players make their accounts safer from attack. But reminding players of account security, especially in the age of the skill extractor that makes even very old accounts valuable, is probably the security team's top priority. The dev blog pointed out the importance of account security once again:


We cannot stress this enough – we know how much effort goes into character development in EVE Online, and it’s worth the extra login step to protect your accounts from abuse and damage.

Protect it all. Enable two factor authentication on all your EVE accounts, and on the email accounts that are verified against them.

Most hacking cases that we deal with don’t originate from a simple password breach on an EVE Online account – they occur when a player’s email account is hacked, and a password reset request is sent to the email address, which then gives access to your characters and assets.

You can help keep your accounts secure by using 2FA on both your email and your EVE Online account and reduce the risk of becoming a victim of account hacking.

For extra security, you can also make sure you use a mobile authentication token to keep code generation on your mobile device and away from your email accounts.

To make life a little easier, with recent changes it’s also now possible to use one authentication token linked to all your accounts. You can check out more about this change in this devblog, which was also linked earlier in this report.

Next up are the bot bans. The 62.5% drop in bans for botting is pretty consistent with the data seen both in the monthly economic report and on Dotlan.


We’re happy to report that in terms of the blackout, it seems to have hit botters harder than we expected, and of course it’s made it a lot easier for legitimate pilots who’ve taken up the sport of bot hunting to get out there and surprise these scumbags with direct attacks on their infrastructure.

Ironically, the Drifter assault on nullsec also highlighted several areas where botting was occurring, and the Drifters themselves managed to get in on a few kills that were later revealed to be botters.

Over the coming months, we’ll continue to work with the development team and the community to look at what we can do to make life even more difficult for these guys going forward.

While bot developers try to keep news of bans off their forums, with something as big as The Blackout, that is not always possible.

Finally came the news of an increase in bans for those involved in real money trading. With all the grumbling of players threatening to leave the game, the 20.4% increase in bans for RMT over the average for the first six months is an indicator many players are in the process of cashing out of the game. I did see a decrease in sellers on the popular gold/plat/gil/ISK selling site Player Auctions, along with a 10% increase in prices, which indicated some sort of ban wave occurred. I'll have to write another post after the August numbers are in before I can determine whether the increase in bans is a result of players cashing out, or an increased emphasis on RMT in July.

A monthly security report is probably required in today's gaming market. The fact that I get some additional content to write about is totally irrelevant. The insights we may gain into the effects of The Blackout, on the other hand, are totally worth it.
Posted by NoizyGamer at 8:14 AM