I'll admit that some of the claims made by CCP's CEO Hilmar Veigar Petursson and CCP's Senior Community Manager CCP Falcon in the interview on the Talking in Stations podcast left me scratching my head. My first look at activity was how major player blocs were affected in 5 major regions. In particular, I looked at ratting numbers. With the arrival of August, I now have the numbers for July. After reviewing the data, I think my previous judgments on the effects of the changes to local in null sec were a bit too pessimistic. 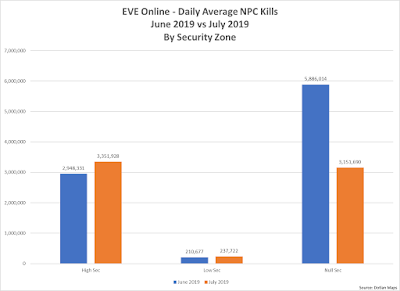 The elephant in the room, of course, is the massive decrease in NPC kills in null sec. A decrease of 2.7 million fewer NPCs killed per day in null sec, and 2.3 million NPCs kills across known space, every day is pretty noticeable. But summer is notorious in EVE for drops in activity. Is this just normal? 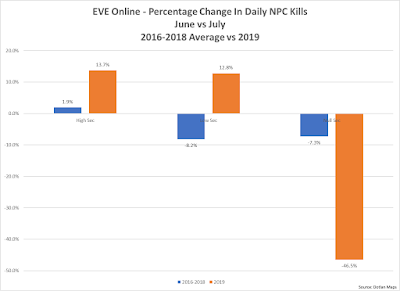 The answer is no. Taking a look at the average change in activity from June to July from 2016 through 2018, we only see an average drop of 7.3% in null sec compared to the 46.5% decrease in the number of NPCs killed this year. We do, however, see double-digit increases in NPC kills in high sec and low sec from June to July this year. Not nearly enough to off-set the massive loss of ratting income in null sec, but increases nonetheless. 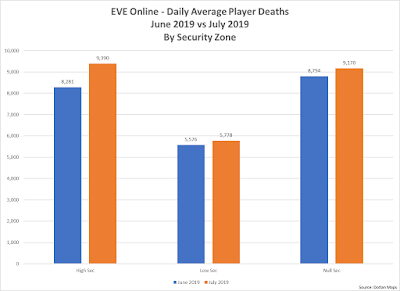 An interesting development occurred in July. Players lost more ships than they did in June. Not just in null sec, where the environmental change made that an expected result. Both high sec and low sec experienced higher player ship losses as well. 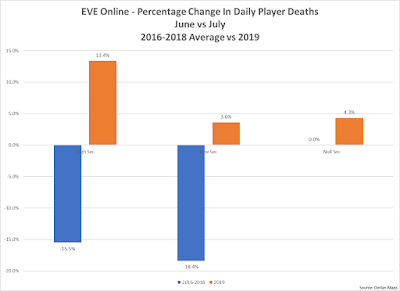 What really struck me was how the increases in Empire space broke against normal summer behavior. EVE has seen an average double-digit decline from June to July over the last three years in both high sec and low security space. So I decided to compare the ship losses if previous trends followed versus what actually occurred during July. 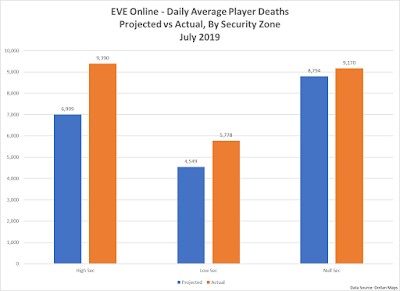 Overall, based on June activity and recent history, a reasonable estimate of daily July ship losses was 20,342 ships per day. Instead, New Eden saw an average of 24,388 per day. Of the additional ship losses over the expected amount, over 90% took place outside null sec. 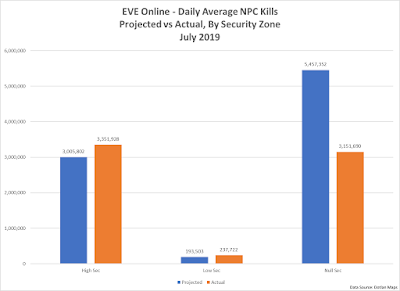 After seeing the results of the ship loss comparison, I performed the same exercise for NPC kills in known space. When I calculated the drop in the expected amount of NPCs killed, the percentage came down to 22.1%. The amount of rise in ship losses in July compared to the expected trend? 19.6%.

Looking at the expected versus actual data changed my opinion about the changes concerning the changes over the past month. If someone told me that CCP were going to implement changes that would result in 20% fewer NPCs dying while at the same time killing 20% more players, I would have said, "Ok, sounds like a reasonable plan. Can they really do that?" The only concern now is how big a hit is CCP taking to its bottom line. A subject to look at next week.
Posted by NoizyGamer at 12:29 PM