The July 2019 monthly economic report (MER) came out today and I thought I'd point out a couple of items. 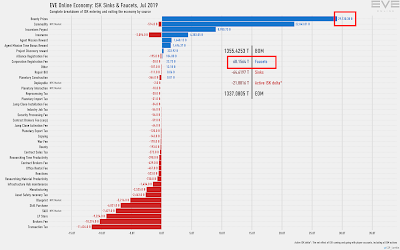 The first is the drop in the amount of bounties collected by players. Dotlan suggested such a drop, but the MER confirms the picture painted by Dotlan's data. From June to July, bounties decreased 39.6%, from 48.2 trillion ISK to 29.1 trillion ISK. Given the trends in August, a total bounties collected total ranging from 21.8 - 23.3 trillion ISK is the number I expect to see in the next MER.

Now for the outrageous predictions. Not only do I expect the game's sinks to exceed the faucets, but I think commodities have a good chance of exceeding bounties as the top isk faucet in New Eden next month. When CCP Rise stated in an interview last week on Talking in Stations that CCP had the faucet/sink issue under control, he wasn't blowing smoke to confuse anyone. I think, at least for now, the faucets and sinks are balanced.

I also want to point out one other fact kind of buried in the MER. Not all PvE is equal. An outsider looking at the statistics for July on Dotlan might believe that most PvE activity occurs in high sec. Or at least a lot more in high sec than in null sec. Below are the top 10 regions in the game in July for NPC kills. 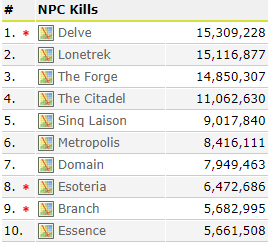 Only three of the top ten regions in killing NPCs -- Delve, Esoteria, and Branch -- were located in null sec. However, when the value of the NPCs is considered, a different picture emerges. 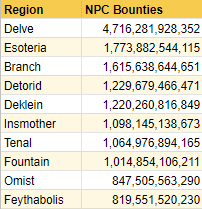 The top 10 regions in NPC value killed were all located in null sec. The above regions combined to collect 52.9% of all NPC bounties in July. Still players killing NPCs. Just not as many as before.

I thought we'd see numbers like the ones above when CCP announced the imposition of delayed local in null sec. That CCP has not backed down from the move, considering the drop in activity these and other numbers in the MER indicate shows the developers are not trying to grab a cheap buck with their latest changes. But we won't know the real world financial cost to the Icelandic studio of the moves until the next Pearl Abyss investors call which should take place sometime in November.
Posted by NoizyGamer at 5:59 PM