The Myth Of The Migrating Bots

In a multiple choice test in EVE, many people, when in doubt, will answer "bots" if given the chance. Even I, someone who has written about botting and illicit real money trading for 8 years, at times find myself in awe at some of the theories thrown around. The latest use of bots as an explanation is quite damning of EVE Online as a game.

The question: Why did activity in null sec drop so much during Hurricane Hilmar, also known as the blackout? The answer, at least in some quarters, was: all the bots moved to high sec.

I decided over the weekend to test the hypothesis that the answer was bots. If the answer was a mass migration of bots from null sec to high security space, we should see the following occur:


The data I chose to analyze comes from the RegionalStats.csv files from the May and August monthly economic reports. May was the last full month before the beginning of the so-called "Chaos Era", and August is the last month for which data is publicly available. I then chose a scatter plot to display the data for both NPC bounties and mining value on one plot for each month. 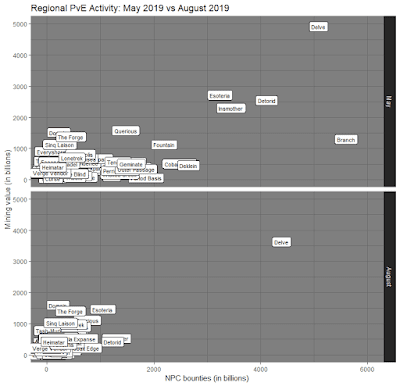 In the plots above, regions in the upper right-hand corner engage in large amounts of both mining and ratting, while the lower left corner represents less PvE. In May, New Eden had 5 null sec regions sitting on top of the PvE world: Delve, Branch, Deteroid, Esoteria, and Insmother. Another four had also separated themselves from the pack: Cobalt Edge, Deklein, Querious, and Fountain. Several other null sec regions gathered in between 1-2 trillion ISK in bounties

August was a completely different story. Except for Delve, no other region came close to exceeding either 2 trillion ISK in minerals mined or bounties collected. Even then, Delve's performance in August, while impressive under the conditions, still did not match its May output. And we should remember that the Imperium was deployed for part of May. The first part of the hypothesis appears correct. Null sec experienced a massive drop in both ratting and mining income.

I documented the damage caused by Hurricane Hilmar two weeks ago. The decline in activity in null sec is not a surprise. But what the above scatter plots showed was in August, no high sec region burst out with a fantastic performance. The next pair of plots strips out the null sec regions and just looks at those located in Empire space. 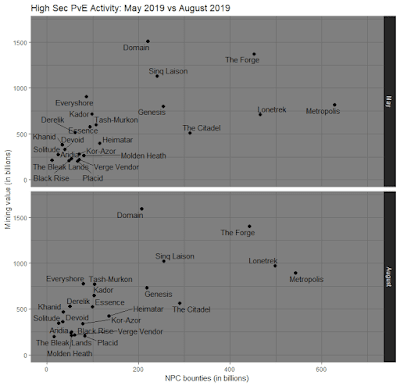 If a massive amount of bots flooded into high sec, one would expect to see at least a couple of regions increase either their mining value or bounty values by at least 200 billion ISK. I don't see any region even experiencing a 100 billion ISK increase. In other words, the condition that empire regions would see an increase in mining/bounty income in reaction to the massive decrease in null sec income fails.

I've read some of the arguments against this conclusion. The bots went to high sec and were banned. Yes, the 6,800 accounts banned for botting and illicit RMT activity in August was an impressive amount. I would also throw in CCP slowed down botting with the introduction of roaming bands of recon Triglavians, at least until bots were altered to take the threat into account.

I may not have all the answers, but I am sure of one thing. I have a basis for stating that bots didn't fill up high sec and overrun the place. While we know from anecdotal reports (and botter tears) that bots moved to high sec to set up shop, they didn't make enough of a impact to show up in the monthly economic report.
Posted by NoizyGamer at 6:03 PM