You don't have the data to make a judgment on the effects of blackout. I don't either. CCP does.


August was the first full month of Blackout in EVE Online. Blackout, the introduction of the wormhole-style delayed local chat system in null sec systems, is blamed for a decrease in activity in null sec. Others claim a decrease in player vs environment activity is good, because null sec was intended as a player vs player zone. These same players claim that PvE activity has increased and gotten better since the introduction of Blackout on 12 July.

Players are scrambling to come up with data to judge the effects of Blackout. While the data available to players is not as comprehensive as that held internally by CCP, we have access to quite a bit of data. Among the key performance indicators players can access is the ratting and player ship kills available on Dotlan. As I did last month, I will look at the numbers from the previous month, the first full month of Blackout.


First, a look at the top 10 regions in New Eden for NPC kills. 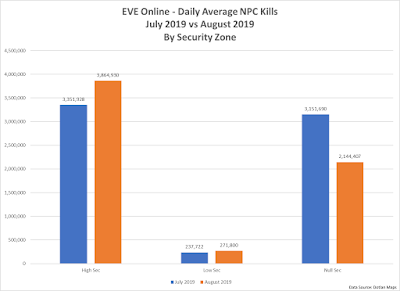 Looking at the security bands, null sec experienced a drop of over 1 million NPCs killed per day in August compared to July. The shortfall in NPC deaths was not covered by increases in anti-NPC activity in high sec (513,002 per day) and low security space (34,078 per day). Overall, 460,203 fewer NPC ships were destroyed each day of August compared to July. 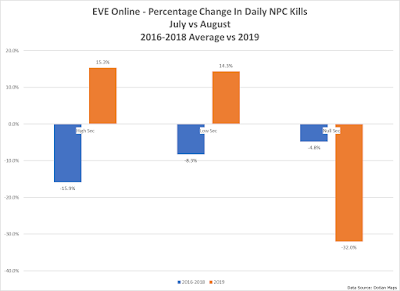 The chart demonstrates the traditional August slump, as NPC kills usually decline across all security bands in known space. A decline in NPC kills in null sec is expected. A 32% decline is alarming. Double-digit increases in Empire space, especially during the dog days of summer in the northern hemisphere, is unheard of. The last time NPC kills increased in empire space in August was 2015 (high sec +4.5%, low sec +3.0%). Even then, null sec NPC kills increased by 2.4%. 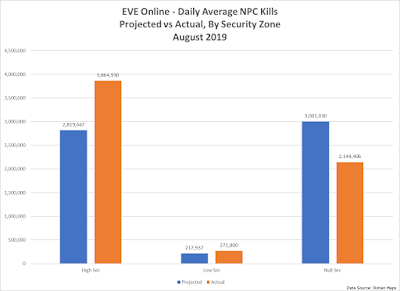 A very interesting data point emerges from the chart. High sec witnessed the destruction of 1,045,263

more NPCs than projected, while the residents of null sec killed 856,624 fewer NPCs. While the projections do not possess that much precision, overall, the changes in high sec and null sec NPC deaths is close enough to bolster the arguments of those who claim null sec players are going to high sec to earn ISK due to Blackout. 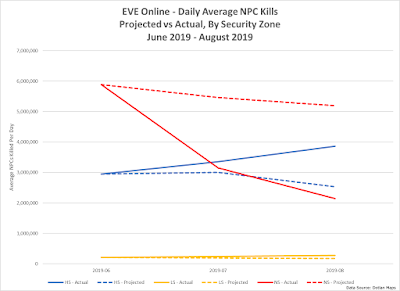 Comparing the last full month before Blackout with the last full month of Blackout, one can really see the changes in activity, especially between high sec and null. First is the startling drop in NPCs killed in null sec. The number dropped from 5,886,014 per day down to 2,144,407 per day. Seasonal differences don't come close to explaining the falloff. Using the 2016-2018 average, we could expect a 690,000 per day drop in NPC deaths, not over 3.7 million. The seasonal variations only account for 18.4% of the drop.

The high sec numbers suggest an increase in PvE activity unexplainable by seasonal variations. In 2019, the residents of high sec killed 916,599 NPCs per day more in August than they did in June. Taking into account the normal decline in high sec activity in August, last month saw over 1.3 million NPCs destroyed per day than expected.

Overall, New Eden witnessed a drop of approximately 1.7 million NPCs destroyed per day from June to August when taking seasonal effects into the calculations.

As with the PvE data, we will first look at the top regions with player ship kills.

The figures are normal. Null sec usually only has one region listed in the top 10 and for the last few months, that region has been Detorid. The number of player ships killed in the region dropped 24.5%. 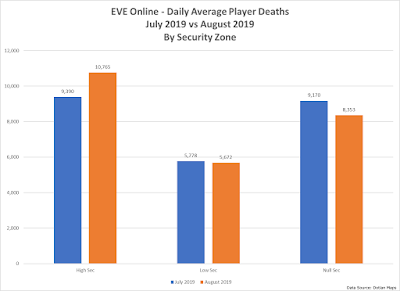 Overall, player ship losses increased 1.8% month-over-month in August. The only security band seeing an increase, though, was high sec, with an increase of 1375 deaths per day. Both low sec (106 per day) and null sec (817 per day) experienced declines. Before accounting for seasonal effects, the above chart seems to confirm a movement of players from null sec to high security space. 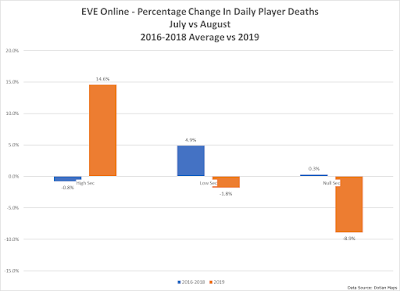 Looking at the above bar chart, one can see that PvP activity in the form of ship losses flipped in 2019 compared to the prior three years. High sec, which usually holds steady in August, experienced a 14.6% increase in player ship deaths. Null sec, an area that also sees steady numbers, saw a decline of 8.9% in ship losses. Low sec experienced its first decline in ship losses in 4 years with a drop of 1.8% in August. 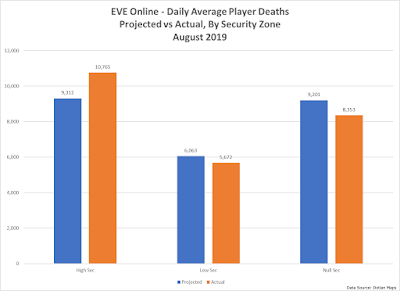 Looking at the projected number of player ships destroyed verses the actual number in August may tell us more about the adaptability of players to Blackout than anything else. Based on recent history, null sec saw 9.2% less player ships explode than expected. Either that, or with all the potential prey no longer present, perhaps players eager to engage in surprise PvP just had fewer targets. 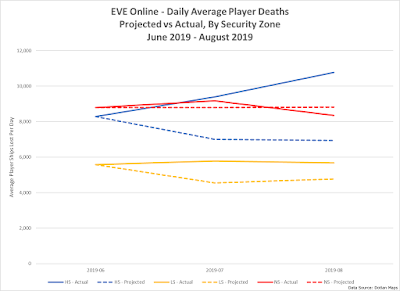 The final PvP chart displays the projected number of ships killed per security band from the last month before Blackout to the first full month of the feature. I think those who advocate for delayed local in null sec fully expected more ships to explode during Blackout than before. I think, however, the activists wouldn't expect where the increases would occur.

Looking at the numbers out of null sec, player ship explosions are down 5% in real numbers from June to August, and 5.3% below what the seasonal values would lead one to expect. As one might expect, the decrease in overall targets engaged in PvE activities probably contributed to the drop.

The real increases occurred in Empire space. While the actual increase only led to 1.7% more ship losses, summer usually sees a drop in low sec activity. After adjusting for seasonal factors, ships exploded at a rate 18.8% higher than expected. The number of high sec player ship losses is the PvP statistic that really stood out when performing the analysis. Not only did actual ship losses jump by 23.1% over the past two months, but that figure increases to 55.1% when compared to the expected numbers based over the previous Augusts from 2016-2018.

As tempting as posting my thoughts on what CCP's end game with the changes it is making to EVE Online, I will limit myself to what the data from Dotlan shows about activity in New Eden. Any theories I have on the game's development will probably change when CCP releases the August monthly economic report.

For PvE, CCP wanted to address the ISK faucets, which rely heavily on NPC kills to provide players with bounty payments. I think the August activity numbers show the developers succeeded in their goal of restricting the ISK faucet. Blackout credibly is responsible for the decrease of 2.7 million NPCs killed per day in New Eden. Even when taking seasonal factors into account, players killed 1.6 million NPCs per day less last month than in June.

Perhaps more important to the issue of the money supply is the distribution of NPC kills. Null sec NPCs pay out much higher bounties to players than those found in high sec. CCP managed to decrease the percentage of NPCs killed in null sec from 65.1% of all NPCs killed in known space down to 34.2% in the space of two months. After accounting for seasonal factors, null sec players reduced their NPC harvest by 3 million per day, with high sec players increasing by 1.3 million per day.

When the subject comes to PvP, I am sure that the developers are happy that more player-owned ships exploded in August than in June. The increase of 2139 player ships killed per day represented a 9.4% increase in ship destruction. According to the historical averages I use to make projections, the number should have decreased by 9.3%. I think CCP can call the turnaround a win.

As I said before, this post will only address the data available on Dotlan. The real money trading economy data (PLEX, skill extractors/injectors, etc) for August is also available for analysis. However, as this post is already over 1600 words, I'll save that subject, along with what I think CCP is up to, for the future.
Posted by NoizyGamer at 4:26 PM