A Look At The January 2020 Monthly Economic Report

With CCP preparing to drop economic changes into EVE Online in March, now's the time to look at the monthly economic report for January 2020. What I have is a very high-level overview of some of the highlights I saw. 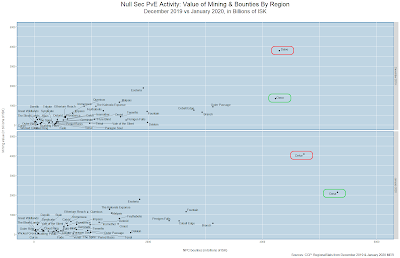 The first bit is the region of Oasa overtaking Delve in ratting income. While the Fraternity dominated region out-ratted Delve 5.31 trillion ISK to 4.73 trillion ISK, Delve saw a nearly 2:1 lead in mining value. So while Oasa saw the creation of more liquid ISK into the game, overall PvE (ratting/mining) supremacy still goes to the Imperium in Delve, 8.81 trillion ISK to 7.46 trillion ISK. We will need to see how the addition of Ranger Regiment and its move to Delve affects the numbers in the March MER.

With the sexy political news out of the way, time to get to basics.

Overall, the New Eden money supply expanded by 4.77 trillion ISK, or 0.4%. ISK faucets declined compared to December by 1.2% while sinks declined 5.3%. I would predict CCP would try to introduce additional ISK sinks, but yesterday the developers published a dev blog announcing changes designed to suck ISK out of the game.

Unfortunately, the ISK velocity, or how many times each ISK exchanged hands on the market on average, declined for a second consecutive month. While we do not know the level CCP considers healthy, the ending rate of below 0.55 in January is below the rate when Invasion launched at the end of May 2019 and way below the rate of 0.8 at the beginning of March 2018. The developers may take additional actions designed to boost the velocity of the currency. 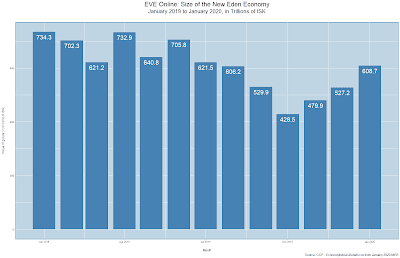 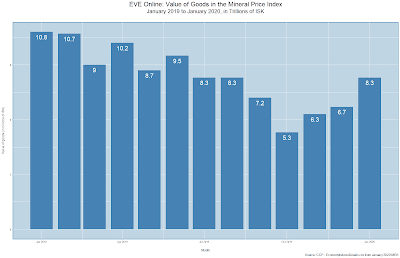 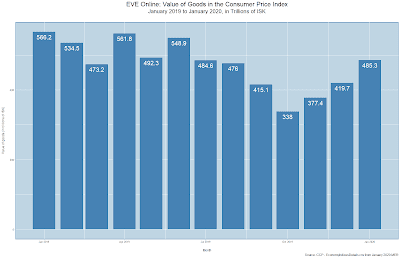 The New Eden economy is consumer driven, with 80% of the value measured by the Consumer Price Index. The value of the CPI jumped by 15.6% from December to January, barely exceeding the growth in the MPI. The 43.6% growth in the consumer sector since October seems tremendous until one realizes it only exceeds the value recorded in July 2019 by 600 billion ISK (0.1%). Compared to January 2019, the monthly value measured by the CPI has dropped 14.3%. 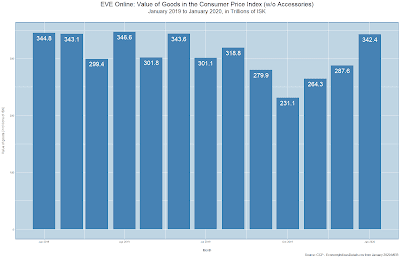 We do see one sector of the economy that has fully recovered compared to January 2019. The non-RMT sector. When removing the accessories category (Large Skill Injectors, Small Skill Injectors, Daily Alpha Injectors, Multiple Pilot Training Certificates and Pilot's Body Resculpt Certificates) from the CPI, we see month-over-month growth of 19.1%. Growth in the non-RMT consumer sector has increased 48.2% since the low point of October 2019. Year-over-year, however, the sector is only down 0.7%, or 2.4 trillion ISK. Basically, the macro level problems with declines in economic growth over the past year lie in the performance of the cash shop economy, or items produced from real world money like skill injectors.

Just a reminder, this post looked at the economy from a very high level. For those wondering how the economy is performing at a market level, I recommend going to delonewolf's YouTube channel. Not only is he an entertaining and knowledgeable EVE content creator, but he also has a market show that runs every Sunday. For those who find that Talking in Stations doesn't produce enough content, I recommend subscribing to delonewolf's channel.
Posted by NoizyGamer at 8:11 AM