The End Of A Quest Line And I'm A Fashion Leader

I started playing Final Fantasy XIV back in July, but never really had something I could write about until now. Over the past few days I did a couple of things I want to record on the blog. I managed to complete the botanist's quest line for the basic game (up to level 50) and I scored 100 on the fashion report.

Crafting isn't just about the complexity of the items and the mini-game used during item creation. Each of the eight crafting classes and three gathering classes has a story line with a quest every five levels up to 50. After reaching level 50, players have to finish the main scenario quest (MSQ) line and reach the Heavensward expansion before continuing. I found myself leveling my crafting and harvesting classes just to get to the next part of the story.

The quest line I completed was the botanist quest line. During the story, the guild master, Fufucha, becomes troubled as her guild becomes caught up in the war effort, supplying the defending forces. A committed pacifist, she decides to leave the guild she loves when the wood the guild supplies is turned into weapons.

At the end, the player gets together with some of Fufucha's friends in an effort to make her see that her deeds made a difference. But not until Fufucha realizes her work benefits the innocents who are affected by war as well as those who wage it does she realize her place is back at the head of the guild after all. 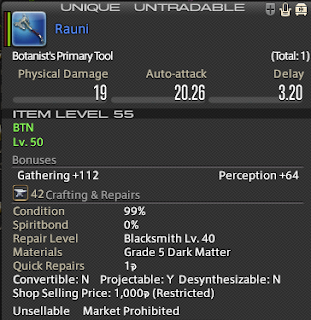 The second is an event I was excited about the first time I heard about it. The Fashion Report is an event that takes place weekly in FFXIV's casino, The Manderville Gold Saucer. For participating in the event, players receive 10,000 Manderville Gold Points (MGP). Receiving a score of 80 earns a player an additional 50,000 MGP. Players receiving a perfect score receive the title of "Fashion Leader"

Thankfully people figure out the solution to the Fashion Report and post to the FFXIV sub-Reddit. I've seen characters running around with a costume that would score 80 or even 100 points that don't look good. I wasn't going for 100 points, but I did want to look good.

My outfit cost 15,750 gil and 3,000 MGP out of pocket. I didn't bother adding up the material costs of making other parts of the outfit because I'm lazy. For the pieces that scored points, I purchased an Oasis Tunic for the body slot, dyed soot black for the extra 2 points. I can't do the Tides dungeon, so I substituted the gloves from the Valentine's event. I dyed those dalamud red for the extra point. For the legs, I chose the Tantalus Breeches, a veteran award, also dyed dalamud red for an extra point. I bought the dragonskin boots off the market, but wasn't able to dye the boots.

To finish off the outfit, I went with a crafting theme. I crafted a woolen beret, dyed soot black for an extra 2 points. The belt doesn't count, but I needed a boarskin tool belt anyway. During the contest I wore The Emperor's New Necklace to avoid my silver necklace from showing, and finished off the set with a pair of wolf earrings. Since then, I've upgraded all the jewelry (except the earrings) up to their mythril versions. And if you look carefully, you can see my weaving pad at my hip. I'm so happy with how the outfit turned out, I made the glamour my new crafting outfit.

FFXIV has brought out my inner fashionista. But I do want to point out one thing. Although I have bought a few items off the Mog Station that I like, all the items in the screen shots were obtained through game play except one. The items seen in the botanist quest screenshots were all crafted by me except for the axe which was a quest reward. And as I mentioned, the pants I wore in my perfect Fashion Report effort were a veteran's reward. Everything else was either purchased from the Gold Saucer, the market, received as a quest reward, or crafted by myself.

As I bump into the end of the base game in FFXIV I plan to blog a little more about the game. I probably won't have as much time to play now that the break between online classes is over and Tranquility is playable again. I think I have enough material for a few more posts even if I don't play again. But I really have to reach the expansion content. I hear the story only gets better.
Posted by NoizyGamer at 8:01 AM