On Thursday morning Seoul time, Pearl Abyss held an investor call to discuss the financial results for the fourth quarter of 2019. But first the presentation went over the entire year.

Operating revenue for 2019 was 33% more than in 2018. Throughout 2019, one of Pearl Abyss' main goals was to diversify its revenue sources. PA moved into the console market in 2019 with launches of Black Desert Online onto the Xbox One and Playstation 4. In Q4 2019, console sales made up 9% of the company's revenue.

Pearl Abyss also sought to make itself a company with a global reach. BDO launched on the Xbox One in North America and Europe in March and the PS4 in August. Black Desert Mobile entered the Japanese market in February and went global in December. November also saw EVE Online expand into Korea with the launch of a Korean language client. The share of revenue from outside Korea increased from 55% in Q4 2018 to 74% in Q4 2019.

The list of expansions and other ways of improving user engagement was briefer than during previous calls. One item of interest was bringing up Black Desert TV which highlights streamers playing BDO. Recently, a CCP dev hinted at a return of EVE TV. Coincidence?

Finally, PA addressed new projects and technology. We did learn that Shadow Arena would launch in the first half of 2020. Since Pearl Abyss is also attending E3 in June, I would not be surprised if the launch was announced on-stage. The company was tight-lipped about the launch of Crimson Desert, DokeV and Plan 8. When asked about the launch of EVE: Echoes, PA referred the analyst to Netease for more details. No mention was made of either Project Nova or the mysterious MMO under development by CCP in London.

At first glance, the operating revenue numbers for Q4 look pretty bad. A quarter-over-quarter drop of 11% is not a good look, even with a 20.1% increase over the Q4 2018 number. But while revenues were down, net profit actually increased by 13.2%. How did this happen?

Pearl Abyss changed the way it pays out commissions. Instead of counting total revenue from console sales, Pearl Abyss started using net revenue to put the company in line with the industry's standard practices. With the new accounting in place, commissions dropped by 56.0%, from ₩40,971 million down to ₩18,007 million. If the old methodology was used, then commissions would have only dropped by 6.6%. 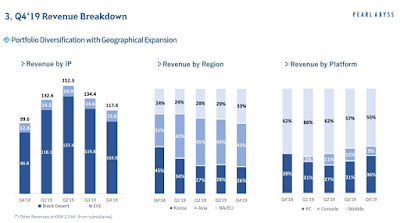 In Q4, the Black Desert IP saw revenue drop by 14.9% (₩17.8 billion/$15 million USD) quarter-over-quarter by climb 17.5% (₩15.2 billion/$12.8 million USD) compared to Q4 2019. The EVE IP rose by ₩1 billion/$845 thousand USD from the previous quarter. A comparison to Q4 2019 is not possible due to the 2019 results not encompassing the full quarter, as the purchase of CCP was not finalized until 12 October 2019. Pearl Abyss credited the growth in EVE Online in Q4 to the introduction of the Korean language client. EVE players have noted the increased number of Korean players and the resulting strength of the Australia/East Asian time zone. Overall, the EVE IP produced ₩59.6 billion ($50.5 million USD) in revenue in 2019.

The above is everything I noted when listening to the Pearl Abyss Q4 2019 earnings presentation. Unfortunately, as of the time I finished this post, Pearl Abyss had not posted either the call or slide presentation on their events page. When the information is posted, people should find it here.

Posted by NoizyGamer at 2:30 PM