Tomorrow Square Enix introduces patch 5.2, Echoes of a Fallen Star, for Final Fantasy XIV. I like the way that SE lays out the patch notes, with hyper-links to the various sections. The patch notes also have labels indicating whether the changes apply to the base game, Heavensward, Stormblood, Shadowbringers, or some combination thereof. While I bought all the expansions, I'm still in the base game's content and will be for some time to come. I decided to list my top 5 changes.


Free Company rank cap increased. The maximum rank for free companies has been increased from 8 to 30. The new FC entitlements are:

Increasing the number of ranks may help encourage established free companies to recruit new players. I see a lot of recruitment going on. My own FC has gone from 290 to over 400 since I joined.

Two actions, Inner Quiet and Innovation, will see changes. The control bonus for Inner Quiet can now exceed 3000. Innovation no longer effects Synthesis actions, but the efficiency of Touch actions will now increase 50% for the next four steps, up from the previous 20%.

Two other actions, Ingenuity and Reuse, have been removed.

Crafting has also seen changes to the UI. The calculation feature was added to the crafting window and required materials are now displayed in blue.

Perhaps most important of all, the developers made increasing progress and quality for recipes higher than a character's current level easier.

Fishing. Fishing received some love in Patch 5.2. Three actions that originally became available between levels 51 to 56, Patience, Powerful Hookset, and Precision Hookset, are now available at level 15. A new type of lure, Versatile Lures, are now available on the Limsa Lominsa Lower Decks and on the Endeavor.

What's the Endeavor? The ship players can now board to go ocean fishing. Ocean fishing is a huge new system that allows players to cruise around Eorzea to the best fishing spots. The feature seems great and I plan on going on a cruise at least once.

Market fees. Fees are now charged for items bought from the market board when the player is in the city where the item was listed. Basically, an uncomplicated change, but will cut down on travel as players will no longer travel from city to city to avoid the fees.

Materia changes. Materia can now be extracted from fully spiritbound gear without losing the original item. Instead of destroying the item, spiritbond is reduced to 1% upon materia extraction.

Plus maeteria can be melded to gear regardless of crafter class. The requirements to apply materia are to have one or more crafter classes (including culinarian) of equal or higher level than the level required to equip the item.

On the personal gathering front, I finished both the fishing and mining quest lines in the base game. The fishing quest line always made me chuckle. But at the end, matters became serious as the fishing fleet was ordered docked due to a sea monster. The task was to prove the sea monster was just a tall tale. 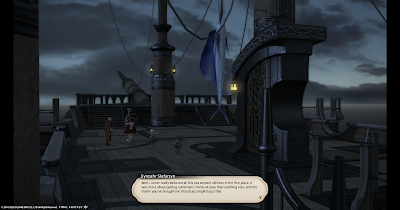 I thought the ending was as quirky as the entire quest line. Hopefully, the tone doesn't change when I finally manage to get to Heavensward. Of course, I received a nice fishing poll as a result of finishing the quest. The mining quest line, on the other hand, involved a couple of nasty characters. Through the quest line, the player has to help Adalberta, the mining guild leader, deal with internal rivalries and disruptions. By the time we reach the end, we only have to deal with Adalberta's old mentor, who she surpassed. 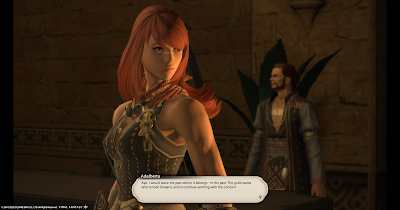 In the end, we discover why Adalberta was chosen as guild leader over her old mentor. And the generous Adalberta gives you a nice gift as well. 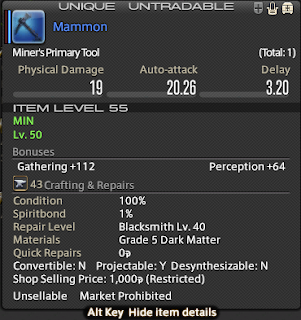 Finally, the fashion report. I was at a slight disadvantage this week as I couldn't make either the Archaeoskin Jackcoat of Crafting or Archaeoskin Jackcoat of Gathering. Don't get me wrong, both items are great, and I intend on making one of each as soon as I can. Patch 5.2 will help with that, as they are working clothes, not just something to pick up for glamour. But the costs were running around 90,000 - 100,000 gil, and that was a bit much.

Another problem was the footgear. Apparently calligae, at least what was available to me, is gender locked for male characters. And if gender wasn't the issue, the fact my only job is white mage got in the way. Without those two slots, getting 100 points was impossible.


I still managed to get 93 points. The four scoring slots were body, hands, legs, and feet. Since the theme was Chocoback Rider, I chose Amenos Jacket dyed Rose Pink. That awarded one more point that the undyed Amenos Suspenders, which I thought looked better, but I'm not the judge.

For the hands, I bought the Claws of the Beast, dyed Rose Pink. Yes, they cost me 30,000 MGP, but I figured I'd use them a lot in the future. I also bought a pair of Pagos Gaskins for 5,000 gil for the leg slots and dyed them Ink Blue. Finishing off the scoring slots, I used a pair of Amenos Expeditionary Boots dyed Soot Black. I also picked up two points by wearing an Amenos Hat dyed Rose Pink.

I figured with the color scheme of the outfit I might have a decent Valentine's Day outfit. I did revert to the Amenos Suspenders, which is what my character is wearing in the screenshot. Once again, I managed to score over 90 in the Fashion Report without resorting to any clothing purchased from the Mog Station.

I can't say I'm really looking forward to Patch 5.2. Most of the really good stuff is for those playing the Shadowbringers content. But I am closing in to level 50 on all my classes and white mage job, so I'm excited about playing and finishing up the base game.
Posted by NoizyGamer at 2:08 PM