Last week CCP announced a new package in the cash shop. The "Training Boost Bundle" consists of 1.5 million skill  points and a cerebral accelerator that gives a +8 bonus to all training attributes for 12.5 days. With Biology V trained, that should give up to 25 days of bonused training. All for the low price of $39.99 USD.
I'm not joking about $39.99 being a low price, especially for veteran players with characters possessing over 80 million skill points. Buying and using skill injectors off the market incurs penalties for older characters. So while a new character receives 500,000 skill points per injector, a character with over 80 million skill points only receives 150,000. So for those who wish to purchase 1.5 million skill points with real world currency for a character, based on Wednesday's prices in The Forge, the prices were: 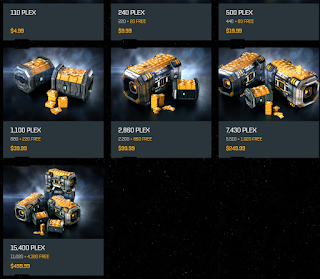 Character with:
Each skill injector requires a skill extractor to create. Skill point farmers will pay PLEX for what they use. The rate is a standard 140 PLEX per skill extractor. The skill extractors come in packs of 5 for 700 PLEX and 10 for 1400 PLEX.
Skill point farmers generally create more than 20 skill injectors a month, so let's calculate the cost to create 20 skill injectors to make the maths easier. The farmer has to outlay 2500 PLEX (2455 if using MCT on for 3 of the 5 characters) plus another 2800 PLEX for skill extractors (assuming they are not on sale). So the manufacturer's cost to create a skill injector is roughly 265 PLEX. Slightly more when the rounding I performed is removed.
Now, to return to the player who wants to boost his 80 million skill point character. Instead of a skill point farmer spending 2650 PLEX in the NEX store for training time and skill extractors, the new skill package only draws in $39.99. How much is 2650 PLEX in U.S. dollars? CCP sells a package of 2860 PLEX for $99.99.
Honestly, I'm tired of the argument. We went through this issue last June. The ones who really annoy me are the players who thought skill injectors were a good idea back in 2015 and 2016 when CCP possibly could have been persuaded differently. And the players who drive me crazy are the ones who deny that, for all intents and purposes, CCP started selling skill points for real world money back in February 2016.
As for the "CCP broke their promise" about not selling skill points directly out of the cash shop, I'd ask the complainers to look around. Back in 2015, CCP was an independent games studio. Now, they are owned by Pearl Abyss, a company not exactly known for being shy about their cash shop offerings in Black Desert Online. The cash shop was the number one reason I had for stopping to play that game.
As old players return to EVE to participate in the latest null sec conflict, I can see the appeal of spending $40 to try to catch up to the newest doctrines. I still don't like that type of jump, but time is passing me by. If players are willing to throw money around, I can't blame CCP for trying to scoop some up.
Posted by NoizyGamer at 5:27 PM