Another week another two levels gained in Black Desert Online. I've transitioned from following the main quest line to going back and following side quests. My thoughts on the experience are below. 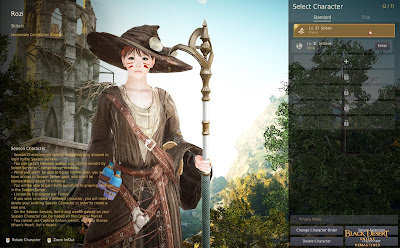 Progress: I finally completed the Medina quest line and reaching level 56, which signaled a switch to going back and completing all the side quests with experience gains. But before doing the side quests, I did two important quest lines. The first was the Awakening quest line, which resulted in gaining access to a new set of skills and a weapon.

The second was the Chenga Tome quest line, which I complained about Tuesday. I realize that the 30% bonus to combat XP when I complete quests is nice. But 22 non-combat quests, in a game where combat is arguably its strongest selling point, doesn't make sense. But I got through the experience.

Story: I'm off the main quest line now, and the Chenga Tome quest line was weak. But I like the tracking down the evil witch thread I was on. If I wasn't in a hurry to level due to the end of the season approaching, I might have run through the first block of quests in Valencia. If the side quests don't get me up to level 59, I may need to do so anyway.

Equipment: By finishing the Medina quest line, I also unlocked the ability to get the Tuvala gear from Fughar. I'm now rocking Tuvala PRI level armor and weapons. When I completed the Awakening quest line, I also received a Tuvala TRI level Awakening weapon. I also picked up a couple of nice accessory items.

Awakening: I was a little taken aback at having to make the choice between the Awakening and Succession skill sets so suddenly. I eventually decided to go down the Awakening path because Awakening seemed the natural progression.

So far I'm not so sure how I feel about the skills. My problem, as always, is learning new key combination. I have a bad habit of hitting the wrong keys and casting Blizzard. But Voltaic Pulse is easy enough to cast (Shift+F) and I like the animation where I cast magic arrows as I punch a mob. I do need to get better at casting Fissure Wave (S+LMB+RMB).

I'm not sure of the technical name in BDO, but I can now summon a pet. I do like the ability. I just need to figure out what I need to do to keep Keeper Tett up instead of Gorr.

AFK Play: I attempted to do my first AFK task: leveling my strength. Basically, players can make their characters stronger by having them march around town with a trade pack on their backs. By leveling strength, characters can carry around more loot.

I failed pretty bad. I thought I'd do well by staying logged into the game all night, but I only reached level 2. Apparently, someone decided to park their horse in my path, and my character marched into the horse for hours. Oh well, lesson learned. Next time I'll pick a better located path.

Cash Shop: The screenshot of my login page shows I haven't hit the cash shop yet. I almost purchased a $50 pack with an outfit, a pet, and a bunch of inventory expansion, but I held out until Pearl Abyss removed the offer. I did, however, use loyalty points to pick up 8 inventory slots and increase my weight capacity by 50 lbs. I eventually will wind up buying a 30-day value pack, but I won't have to until early April.

All in all, I think I'm making decent progress. The videos I see say that it shouldn't take long to level a character. One YouTuber has a live stream where he levelled a character from 1-60 in 15 hours. I doubt I'll get to level 61 by next week, but I'll give it a shot. But after the end of the season, I'll be able to relax and not put so much time into leveling.

Posted by NoizyGamer at 8:55 PM