Yesterday CCP released the second half of the latest industry revamp for EVE Online. The patch updated the build requirements for all tech 1 ships, to include faction navy and pirate ships. And yes, titans, supercarriers, dreadnaught and carriers are considered tech 1 ships. As often happens, the patch notes don't contain all the changes. Other web pages such as dev blogs are linked, meaning a reader has to have a few tabs open to try to follow along. I thought I'd try to put all the relevant parts of the patch notes and the dev blog "A significant update to history" in one post.

The patch notes began with a general description.

In accordance with the information provided in this development blog we are introducing several significant changes to industry in EVE. Today's patch will see the second set of major changes go live which will update blueprints, reactions, and components that are required for ship manufacturing.

The dev blog "A significant update to history" expanded on the changes players saw in their ship blueprints.

Requirements for a given ship will be determined by a variety of factors, including tech level, ship category, hull type, size, and purpose, among other things. Based on these factors, each ship will be given a tier, and their material costs updated accordingly...

The new reactions and blueprints for component construction will be available via NPC markets. What’s more, reprocessing material values will be updated for subcapital ships as well as for existing capital components.

CCP provided an Excel spreadsheet with all the changes that can be downloaded at this link. In game, the changes look something like this. 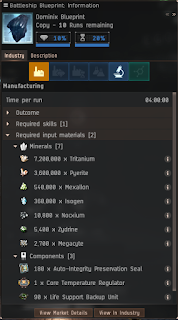 The dev blog indicated EDENCOM module blueprints would receive an update to have an overall reduction in the materials required for a build job. But the ships also received some attention.

According to the earlier dev blog, reprocessing material values were updated for subcapital ships as well as existing capital components. In the patch notes, T2 ships received a special note.

Adjusted all T2 ships to no longer return basic minerals as materials when reprocessed. Materials removed from all T2 ships reprocessing are:

The changes to Standup T2 fighters was a bit vague in the patch notes.

The dev blog expanded on the topic.

Due to the nature of the manufacturing changes, which include introducing Mycoserocin gas as a required material in some ships, the potency of all Mycoserocin booster products is being doubled.

In addition, the distribution of Mycoserocin gas clouds will be greatly increased and will now be included in all Lowsec systems, as well as select Nullsec systems.

The patch notes spelled out the boosters affected.

Finally, the patch notes listed one defect fix. An important fix considering the design goals of the revamp.

Posted by NoizyGamer at 9:05 AM