Black Desert Online: The End Of The Season And Final Thoughts

Wednesday marked the end of the winter season in Black Desert Online. Once I reached level 59 on my witch Tuesday night, I went a little farther, rode to Heidel, and logged out while standing next to Fughar. I now have 104 energy and 188 contribution points after playing over 90 hours (not including AFK time) in March. 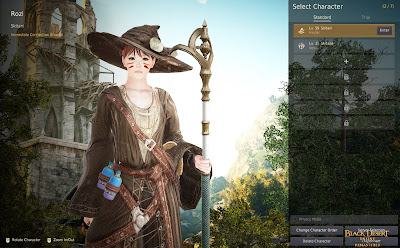 My original plan was to spend $10 to buy a value pack and play a second month. I wanted to restart and expand my worker empire from the first time I played. After a month, though, I don't really want to play BDO anymore. I want to get back to Final Fantasy XIV and EVE Online. I've already done life skilling in BDO and I enjoy the economic activity in the other two games a lot more. With that said, I should finish up with a final post about my latest experience in BDO.

The Season: The concept of the season has its ups and downs. On the positive side, seasons allow players to create alts in a PvE environment. The concept of having beginning armor and weapons to practice concepts like enchanting is also good.

The big problem with seasons is time. Jumping into a season at the beginning gives 3-4 months to level and do everything, giving players plenty of time to run around. I wound up coming back to BDO as a result of Pearl Abyss taking over as publisher of the game in the west. As a result, I was rushing to try to level as fast as possible. But overall, I think Pearl Abyss should bring back seasons.

Combat: I never did feel comfortable with the controls. I pressed so many wrong keys, even the AI managed to kill me a few times. With a character over level 50, I would have to compete with others in the open world now that I'm on regular servers. I'm so bad, I'd be easy pickings, assuming I was able to gear up properly in the first place. People who like action combat and using keybinds would definitely fare better than I did.

Autopathing: The autopathing function in BDO isn't really that good. I have wound up going into really bad places. One would think autopathing would keep one travelling on the roads, especially over long distances, but that's not what happens in BDO. Stopping at a cliff face is bad enough. One time, the autopath function ran me into an object and the only way out was to use one of the teleport maps to get myself unstuck.

Maps: The mini-map in BDO is fine. If I could have figured out a way to expand the size to make it more readable, I'd give the mini-map higher marks. The larger maps though could use some improvement. Unless something major changed, the larger map is good for lifeskilling. I did wind up buying some storage in towns, so I can tell that works well. The problem comes when trying to use the maps for navigation. I think trying to use the large map for navigation led to some of the autopathing issues I experienced.

Personal Inventory & Storage: First, I have to note that I purchased inventory slots the first time I played BDO. I didn't buy account-wide inventory, so I shouldn't have received any extra slots on my new character. With that stipulation out of the way, I leveled a character from 1-59 without purchasing any inventory space. Pearl Abyss did provide additional inventory slots both via quests and daily rewards for returning to the game. I also purchased the maximum 8 inventory slots available from the loyalty store.

Black Desert Online is unusual in current games because they also keep track of weight. One of the reasons for purchasing a value pack is the additional 200 pounds characters can carry. I did have to carefully manage the weight and purchase a 25 pound weight allowance from the loyalty store to get by.

Because I already had a worker empire built from my first time playing the game, I already had town/city storage available. That's right, storage obtained in-game is account-wide. One of the beneficial nuggets of knowledge I received watching YouTube videos was the importance of running through the main story questline in order to get contribution points. In-town storage is purchased with contribution points as well as from the cash shop. I did manage to acquire enough contribution points to purchase enough storage without resorting to pulling out my credit card.

I do have to point out that part of not wanting to play anymore was due to my personal inventory beginning to become inadequate and requiring a visit to the cash shop. I also have to point out that the game starts flashing at the player when either the weight carried reached over 100% or runs out of inventory slots. As in, a button pops up to the cash shop. That button is way too tempting to push.

Pets & Servants: Pets and servants are two additional features in BDO I like conceptually. Pets not only loot the field so you don't have to, they also provide buffs and server as early warning against danger. Players can deploy 5 pets at a time. In my run up to level 59, I obtained 3 pets. Since pets are shared account-wide, the 2 pets I received the first time I played meant after 4 weeks I was running around with 5 pets for which I didn't pay any money.

A feature I didn't run into the first time I played was servants. I love the concept. A servant can either run one item from a player's inventory to either the nearest town storage or the nearest marketplace for sale. I received two servants from doing the main story questline. All other servants are obtained from the cash shop. Did I mention there is no limit to the number of servants can own and they only cost 1200 pearls ($12) each?

Enchanting: The enchanting system required to get the most out of a character's gear is downright scary. I enchanted my Naru gear up to PEN and traded the set in for Tuvala gear so experienced the process. Honestly, I can see how players can spend hundreds of dollars upgrading their gear. I want nothing to do with that.

Appearance: Following the main story questline resulted in receiving 4 sets of appearance gear. I like the fact that one doesn't have to visit the cash shop in order to look decent. One part of the appearance gear I don't like is appearance gear has stats on it.

The Pearl Shop: I have to say, BDO's cash shop is very well done, if a little too expensive for my taste. The value packs are appropriately priced at 1500 pearls ($15), which is comparable to a subscription in other games. But many of the packages are definitely not microtransactions. Honestly, if someone wants to avoid spending a lot of money in a video game, run away!

As the title of the post implies, this post only covers content I personally experienced running through the season. As such, I left out subjects such as housing, resource collection, crafting, and other life skills that make up what some call the worker empire. I'm going to stop playing now and concentrate on the content coming to both Final Fantasy XIV and EVE Online on April 13. I have to say I didn't enjoy BDO as much as I do the other two games. But I did want to record my impressions as I have the feeling I may return to BDO sometime in the future.

Posted by NoizyGamer at 2:00 PM