The Ani Campaign - The Ani Constellation 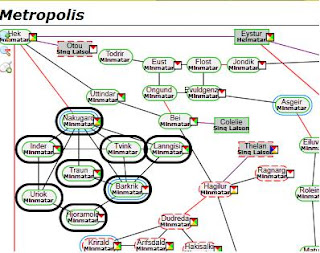 Security: The Ani Constellation is a bit unusual in that all 8 systems have a security level of .5.  This is a plus in that the systems are high-sec, although the response from CONCORD will be slow, so tanking against suicide gankers is warranted.  Some distribution missions from local agents can easily send unsuspecting pilots into low-sec, so pay attention to your low-sec warnings.

Politics:  The relatively low security levels in the constellation, while under CONCORD control, has led to some interesting people inhabiting the area.  The major players in Ani are:


"Joint Harvesting was formed a decade ago when several agricultural and mining companies joined together to form one giant company. One of the largest raw material companies in the world of EVE, Joint Harvesting conducts a wide variety of resource gathering and operates both inside and outside the Amarr Empire."

The one interesting fact about Joint Harvesting is that of the four station-holding corporations in Ani, it is the only one without medical facilities located in the constellation.

Krusual Tribe - The second biggest presence in Ani is the Krusual Tribe.  The Krusual hold 3 stations with 7 agents, including 1 level 4 agent, in the key system of Nakugard.  The Krusual have a reputation as sly and cunning, shrouding its ways in lies and secrecy. It is isolationist by nature, but lately it's been becoming more and more involved with the power politics of the Republic, staking a claim for its mastery.

The juxtaposition of the Krusual and the huge Amarr corporation Joint Harvesting is interesting given the Krusual's history:


"The Krusual tribe initially inhabited the mountainous region of the upper Tronhadar-valley on Matar. The other tribes regarded the Krusuals as the most barbaric of them all, but that stemmed more from a lack of knowledge about the intricate culture of the secluded Krusuals rather than being an actual fact. The Amarrians had real difficulties subduing the Krusuals during their conquest of the Minmatars and the unruly Krusuals in their mountain bases were always a thorn in the Amarr side."

Sisters of EVE - Given its history of providing humanitarian aid during the Minmatar Rebellion and the possibility of conflict between the Krusual and the Amarr industrialists, few should find it surprising that the Sisters of EVE have a presence in Ani.  The Sisters maintain 4 agents as well as medical facilities in 3 stations in the constellation.

One does have to wonder if the organization has more than a humanitarian interest in the area:


"But the Sisters do more than just come to the aid of those in need. They are also devoted practitioners of their religious beliefs, which center around the EVE gate. The Sisters belief that this ‘relic from god’, as they call it, holds the key to the universe and are determined to unlock it, in order to bring ‘everlasting peace under god’s guidance and guardianship’ to the world of EVE. The Sisters maintain that god resides at the other side of the gate and from his domain he guides the lives of those that belief in him and keeps them out of harms way. The Sisters have large followings in all the empires (even some Jovians) and the organization is mostly run on donations from those followers, as well as from some limited commercial enterprises and tariffs levied on those visiting their stations."

"The Republic University (from where future Minmatar industrialists graduate) was founded by Minmatar emigrates as a show of support for the fledgling republic shortly after its inception. The school is modeled after the University of Caille and based on the Gallentean education system."

In addition to the four corporations listed above, the Ani constellation is also home to a large contingent of the Angel Cartel as well as COSMOS agents plying their trade at locations in space.

Moons and mining - The low security levels of all the systems in the Ani constellation are conductive to economic activity even with the presence of only one station with manufacturing facilities.  The constellation boasts 283 total moons with 60 alone located in Nakugard, one jump away from the Hek trade hub.  But that is not such an advantage as 180 of the moons are withing 2 jumps of Hek.  And the .5 security level is the lowest bar to anchoring a POS in high-sec, meaning the bulk of industrial activity like manufacturing, research and blueprint copying takes place in POS, making the numerous capsuleers who call the area home a potential big power bloc.

The mining opportunities are as good as it gets in high-sec.  The constellation boasts 80 asteroid belts containing Plagioclase, Scordite, Veldspar and Omber.  In addition, Ani contains not one but two systems with ice belts.  Those with loyalties with the Minmatar will enjoy Nakugard's refining facilities along with its 23 asteroid and 1 ice belts.  The Amarr are not far behind with Joint Harvesting possessing good refining facilities in Barkrik with its ice belt and Hjoramold with its 12 asteroid belts.  The Caldari and Gallente, if not wishing to gain faction with either of the other two rivals, can always use the Sisters of EVE facilities in Inder with its 16 asteroid belts, although the Caldari don't really do more than tolerate the Sisters.

Exploration - I'm not sure exactly the exploration possibilities in Ani, but with every system having a .5 security level, bringing along a ship capable of doing some serious scanning is probably warranted.

This concludes my initial look at the Ani Constellation.  I'm sure I will find more as I explore all the mysteries that this interesting area of New Eden holds.
Posted by NoizyGamer at 6:00 AM