As much as I like to just fly around New Eden, Inferno enticed me into actually running some security missions that are not storyline missions.  I wanted to look at the new missile animations so I took some time out from doing distribution missions and fit out a Breacher to do a couple of (hopefully) quick missions.  I spent more money than I really should have, but I wanted to see what the Breacher could do.  I'm not very good at ship fitting, so I'll include the fit so you can get some laughs. 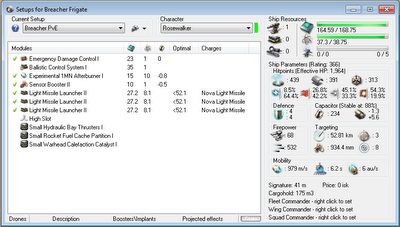 The theory is to use speed to hold the range and then safely kite the NPCs from outside their engagement envelope.  I had some fitting issues so I left one high slot empty, but that didn't bother me since the major reason for flying the Breacher was to watch the missiles fire off.  I fitted tech 2 missile launchers but not tech 2 missiles.  I figured that I didn't need them.

On Saturday before doing my usual running around doing distribution missions and picking up and dropping off blueprints to be copied and researched I ran through the 5 mission "After The Seven" level 1 mission chain.  Four of the five missions require combat.  Well, in the Breacher, I didn't fight the Serpentis ships as much as perform an execution.  I don't think I was truly threatened during any of the missions.


On Sunday, I ran two missions in order to get some screen shots.  In the first I fought my old foes the Angel Cartel in "The Score".  With a warp in at about 40km to the closest ship, this mission turned into an old-fashioned turkey shoot.  The only reason I really needed to move is that I forgot to turn on my sensor booster so the Angel ships got closer then they really should have.


The second mission required taking out a drone infestation.  The drones were located 25km - 50km from the warp-in point.  I just kited each group separately and then proceeded to destroy the drone silo.

I have to say I had a lot of fun fitting and then flying the Breacher.  So much fun that when I decide to start grinding my horrible Caldari standings back up I may actually choose to do a few security missions along the way.  That won't be too soon since I'm still on my faction grind to purchase faction ship blueprints.  But I just received an Eve mail from Aekelm Ontbald asking me to eliminate an Amarrian reconnaissance outpost so I'll take my Breacher out for one more mission before climbing back into my Prowler.
Posted by NoizyGamer at 8:57 AM