I was on the train this morning about to pull into Union Station when the call went out over Twitter from CCP Zulu...


That's right, a botter.  I really hope this one doesn't try to petition his ban because there were a few witnesses from CCP on-hand since this botter decided to live stream his actions on own3d.tv, the home of Alliance Tournament X.  Soon, lots of devs showed up to prove they hate bots as much as CCP Sreegs, CCP Stillman and CCP Peligro.  DJ Funky Bacon linked to a screenshot of local. 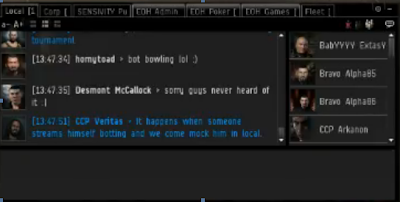 Since no one managed to record the stream or fraps the incident, I thought I'd link to some of the tweets in #tweetfleet to give a sense of what happened.


@KanoTranker No, CCP Veritas accidentally reminded him that he was livestreaming in local... :( #tweetfleet
— Two step (@two_step_eve) July 11, 2012


@two_step_eve @KanoTranker No accident, we'd been bumping and talking in local for a while and have better things to do. Got to the point.
— Brian Bossé (@CCP_Veritas) July 11, 2012

@RegnerBA Man that dude needed to be hit with a SUPER HUGE cluestick to see what was happening to him.#tweetfleet #eveonline
— Brian Bossé (@CCP_Veritas) July 11, 2012


@CCP_Veritas He really did. I figured the gig was up as soon as Zulu showed up in local or his viewer numbers started to rise.
— Regner Blok-Andersen (@RegnerBA) July 11, 2012


Now, ordinarily getting caught on a live stream being used as a soccer ball by a bunch of CCP devs in Jovian frigates is bad enough.  But did you notice on the screenshot the EOH Admin chat tab?  That's right, he was employed by Eve Online Hold'em.  I use "was" because one of the co-owners of EOH, Niraia, posted on the Reddit forums,  "Hi, EOH co-owner/security here. As of now, the offending player no longer works for us. Good catch, thank you!"

Hopefully one of the CCP devs did manage to fraps the scene and will post the video on YouTube.  Or maybe someone in system will post the chat logs in local.  But until then I have to say bot bowling is one of my favorite sports, even though I've never played or watched it.
Posted by NoizyGamer at 6:00 AM