Last week when I was comparing the player activity after the launches of the Incarna and Inferno expansions I was reminded that I needed to take summer into account.  I had been careful in my post about player activity in the month before the Inferno launch, comparing that with the run-up to the Tyrannis launch since both expansions launched in the month of May.  But I didn't take the difference when comparing Inferno's May launch with Incarna's June launch.  The difference isn't that great, right?

Fortunately for me Chribba has almost 6 years' worth of data about player activity on Eve-Offline I can study.  So I did and the results were surprising.

I took the median daily average concurrent user number for each month from January 2007 to December 2011 and then compared that number to the median daily average concurrent user number from the month before.  Sure enough, the numbers show that activity decreases during the summer.  But the numbers show that summer really means summer (late June to late September) as the average jump in activity between May and June was 3.8%.  So why does June have the increases? 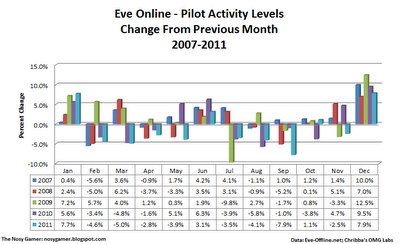 So while the seasons influence player behavior and whether they log in, the seasonal influence evaporates when an expansion is launched.  At that point players want to see and play with the new shinies.  Well, except for Incarna.  We all know how that turned out.
Posted by NoizyGamer at 6:00 AM