The rankings of the top twelve MMORPGs as determined by the players of the Xfire community from play on Sunday, 8 July 2012.  For more details about the methodology, click here.  Historical data can be found here.

Third time's a charm:  After the disastrous launches of Anarchy Online and Age of Conan, Funcom finally appears to have a decent launch of an MMORPG with The Secret World.  As expected TSW jumped ahead of both Aion and Eve Online but failed to post Tera-like numbers and jump ahead of Star Wars: The Old Republic.  Whether because of Funcom's reputation or the upcoming release of Guild Wars 2 next month many players indicate they are waiting a month or two before giving TSW a try.  This trend may work out in TSW's favor as the Funcom offering may avoid the rapid decline in playtime suffered by recent titles like SWTOR and Tera.
Another game, another decline:   Nine weeks after the full launch of Tera, the game shows the pattern in the Xfire numbers observers have come to expect of MMORPGs. 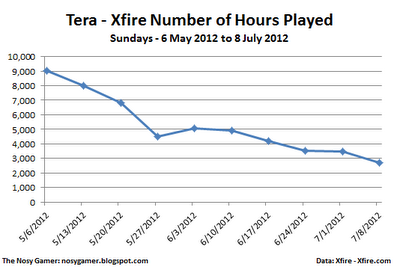 In the nine weeks since the launch weekend, Tera has experienced a 70.3% decline in the number of hours played by the Xfire community.  This decline corresponds closely with the 62.7% decline suffered by Star Wars: The Old Republic from 1 January to 4 March.  Will Tera manage to stabilize its numbers?  If Tera continues to mirror SWTOR's performance, the release of Guild Wars 2 could actually knock Tera out of the Digital Dozen.
Posted by NoizyGamer at 6:00 AM