Celebrating The New Year With An RMT Sweep

Trying to track CCP's Team Security and its anti-RMT activities outside of dev blogs is a challenge.  One method is from reading botting forums but that method is drying up as botters are either learning to HTFU and not cry or forum administrators are mopping up the tears and deleting posts.  I believe the effects of CCP's efforts, however, are discernible by watching the 3rd party(1) ISK market.

My method of tracking the price of 3rd party ISK involves using the listing of web sites selling in-game currency found at MMOBUX.  While this list does not contain many of the more popular ISK selling sites the list does contain many of the major players in the global 3rd party RMT market.  If the prices seem high, that represents the fact that these sites have more overhead than Joe Caldari who is selling ISK on a forum for $14/billion.

So what does my index of 3rd party ISK selling sites tell me?  Something really hit the supply of ISK available to the 3rd party gold sellers recently.  Either a lot of new people have entered the game who have never heard of PLEX, something is up in null sec involving someone with deep pockets or CCP Sreegs' merry band is busy showing the rest of the MMO industry how to fight bots and RMT.  Trust me, some of the other companies need help.  Given the research I've done this weekend, I think the answer is Team Security is up to its old tricks. 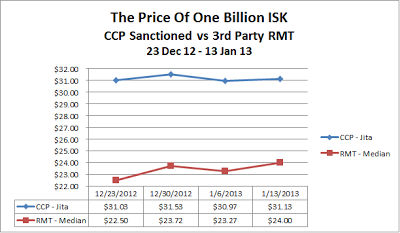 The numbers themselves don't look drastic at first look.  While the price of ISK purchased in The Forge (i.e. Jita) market has remained basically flat the median price of 1 billion ISK sold by 29 3rd party ISK selling sites rose by 6.7%.  What this represents is that the discount someone would receive in purchasing 3rd party ISK has declined from 27.5% down to 22.9% in a fairly short time.  As CCP Sreegs stated at Fanfest 2011 his objective is to make botting and RMT unprofitable enough that people do not want to engage in those activities.  I do not know what the discount percentage is that is required to keep players purchasing 3rd party ISK but shrinking the percentage is one of CCP Sreegs' goals.

I'm pretty sure that what I see is part of an anti-RMT operation that began at the end of October but Team Security apparently disrupted the operations of some of those supplying ISK to the 3rd party sites in the days following Christmas and then again in the latter part of last week.  Since 23 December eight web sites have increased their prices an average of 25.1% and over the past few days six companies raised prices by 20.4%.

When evaluating whether a company is actually selling ISK I look at what I call "The Jita Line"(2).  Having watched the market for the past three months I think that some companies just list a currency for a very high price just to say they sell currency in all the major MMORPGs but really don't get any business because most buyers of in-game currency will find a cheaper seller.  In the case of Eve Online the seller most companies have to contend with is CCP itself.  For examples let's look at two Hong Kong-based web sites, Koala Credits and MMOGA. 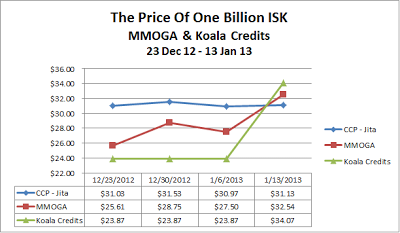 I wrote about Koala Credits in November when the site stopped selling ISK for two weeks.  Apparently the site's ISK supply was fragile because last week Koala Credits raised its price 42% to $34.07.  That is almost $3 above the Jita Line.  In effect the company can buy PLEX from CCP, sell it on the market, then give it to their buyer.

MMOGA apparently just wishes to not have to worry about accepting orders.  The company that claims German roots raised prices 12.3% just after Christmas and then last week raised the price 18.3%, putting the price of its ISK $1.41 over the Jita Line.  I don't think that price is enough to justify the same tactics available to Koala Credits.

Can I state with 100% certainty that these price increases are a direct result of actions taken by CCP?  No.  But if they are not, then someone is buying an extremely large amount of 3rd party ISK.

(1) - I am switching my terminology from "illicit" to "3rd party" when describing RMT currency because in some countries like South Korea selling game currency is illegal.