On Saturday I wrote a post wondering if I needed to move back to high sec.  I don't think I did that good a job explaining why I think I may not have a choice. 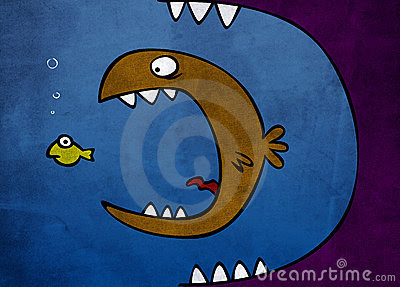 The comic above describes my place in the EVE ecosystem.  I'm the little yellow fish.

I've heard veteran players talk about the old days when they would prey upon the miners in null sec.  Well, I tend to fly ships without guns (Procurer, Prowler) so I definitely qualify as prey.  Which means if someone wants an easy kill, or at least one that can't shoot back, I'm high on the list.  But I can do some things that make me not worth the effort.  Things like mine in belts that are outside directional scanner range of the gates in a system so I'm not spotted.  Or I can mine in a Procurer instead of a nice, juicy Mackinaw that would draw attention.

With the Tags4Sec feature in place, gangs will have an incentive to sweep through all the belts.  I talked with Sugar Kyle and CCP Masterplan about the changes Saturday and Sugar explained that The humbleless Crew will begin checking the belts for the new rats that drop the tags.  Why not since doing so doesn't take that much time?  I can see a lot of mid-sized roaming gangs doing the same.

My problem with this is that my risk goes up, but not the reward.  Yes, some minerals are receiving buffs, but the ones that reside in low sec belts are not.  I'll need to monitor the situation to see exactly how player behavior changes.  Luckily I purchased a bunch of Procurers so I can move them into my low sec base and do some experiments.  Experiments is just a fancy way of saying lose a few.

According to CCP Masterplan, the devs picture three types of players will visit the belts once the changes are in place.  The first are those who are looking for tags to improve their sec status and do not want to do anything that will lower their sec status.  The second type are just looking for the tags to sell for cash and really don't care about their own sec status.  Those pilots will set up to take on a battlecruiser rat but have no problems firing on the competition.  The final type are those who don't care about NPCs and just want to kill other players.

After listening to the list I realized that the one type of player lacking was the low sec miner.  Given the assumptions about who would visit the belts, I understand why the rewards didn't go up for low sec miners operating in belts.  The devs must have data showing that they could give no realistic reward that would attract a significant amount of players to belt mine in low sec.  Having thought about the situation for a few days, the fact that asteroid belts aren't really made for asteroid mining is a bit humorous.

Just because CCP is turning belt mining into an extreme sport doesn't mean mining is dead in low sec.  However, after looking at the changes to gravimetric sites, I began to wonder.  Gravimetric sites, currently cosmic signatures, are metamorphosing into "Ore sites" which are classified as cosmic anomalies.  That's right, probes are no longer required to find these sites.  Also, no more warning to miners that someone is looking for them.

So the safety in mining in the formerly fairly safe grav sites is out the window.  Did the rewards go up as well?  I asked CCP Fozzie this at the Resource Rebalance round table and he stated that after the changes the value of ore sites in low sec will increase anywhere from 110% to 150%, depending on the site.  In his opinion, if a miner keeps alert and aligned, the increase in the value of the sites is commensurate with the increased risk of attack.

That's okay for a solo player like me, but what about small corporations who depend on mining ops to clear out these ore sites to build ships for PvP?  Will these players drop Orca-supported fleets of Hulks into a site once they don't have that warning period given by seeing probes in space?  I'm a little fish, not one of the people at the top of the food chain, so I don't know.  Does anyone know how Pandemic Legion or Dirt Nap Squad, two organizations famous for hot drops/black ops drops, view the changes?  Dropping on a Procurer probably won't happen.  Dropping on 8 Hulks with an Orca?  I bet they might find that fun.  Basically I'm such a small fish that I'm not even a worthy snack.  Not that I'm complaining.

I do have to add one more item for consideration on whether I need to move back to high sec.  With the ease of finding ore sites now, will any still remain by the time I can log in after work?  This wasn't such a concern before because I could always hop in a belt if I wanted to mine and didn't find a grav site.  Beginning in Odyssey, belt mining is potentially a really dumb thing to do unless I want to engage in a little PvP.  And with as much adrenaline as I had flowing through me after my last fight, I don't really want to do that before I try to get some sleep.  So while I might have an interest in remaining, I may not have enough food to lead me to stick around.  The smallest fish do need a reason to hang around and begin the chain.  I really hope I find that reason because I don't like high sec.
Posted by NoizyGamer at 7:00 AM