Having identified what I consider a nerf to my play style in low sec, I'm just going to cry, tuck my tail between my legs and return to high sec, right?  Muhahahahaha!  Sure, I'm a carebear, but I'm a stubborn carebear.  Yesterday I wrote a post about my place in the EVE ecosystem of PvP and how the changes affect low sec mining.  Today I'll offer up a cartoon as the way I see myself. 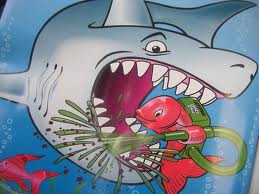 I'm the red fish thinking outside the box.  They are known as pilot fish.
The pilot fish is known for hanging around predators like sharks, even going into their mouths to grab little chunks of food.  While I don't want to get that up close and personal with EVE's predators, I did like this description from Wikipedia.


"The pilot fish is harmless to human beings and is said to taste good, but it is rarely available due to its erratic behavior when caught."

That pretty much describes how I play EVE.  Sure, I get my one kill mail a year, but I usually just run away.  But when I'm not running, I'm doing something in low sec systems, often with the faction warfare types doing their thing.  They have much more profitable things to do with their time than probing down a Procurer or chasing a Prowler.

But the question arises: how do I maintain my low sec lifestyle in the changing environment that Odyssey will bring?  I have a few ideas.

Change Expectations For Mining - I have to stop looking at the changes as a nerf and look at them as a challenge, with ore sites just mega asteroid belts I have to wander around to find.  I also have to stop expecting to find very many since by the time I get home in the U.S. time zone others will have already mined them out.

Ninja Wormhole Mining - I can make up for some of the low sec mining nerf by scanning down wormholes and doing a little ninja mining.  Up until Odyssey ninja mining was a pain due to having to probe down the grav sites.  With Odyssey, quick trips are now possible.  I may even sneak a Skiff in for the extra ore bay space.

Exploration - Right now I expect the upcoming changes to exploration will prove a net nerf for solo players due to having a limited time to gather up the loot.  That's too bad as I try to begin my night's activities by probing down sites whenever possible.  I'm clumsy, but I like the mini-game.  Besides, bots can't do it.

Distribution missions - Currently my "holy trinity" of activity in space is exploration, mining, and running distribution missions.  I just finished up the grind for Boundless Creation standings, meaning I have the standings I need with the NPC corporations that own the two major trading stations in Minmatar space in Rens and Hek.  I like doing them every once in awhile and don't see that changing anytime soon.

Security missions - With the changes I expect part of the meta-game will involve pilots leaving their scanners at home.  Well, except for the most experienced who will patiently wait for ships to try their luck at unlocking the riches of radar and magnetometric sites and then kill them.  I am going to step out of my comfort zone and start running the security missions in low sec.  Hey, it's something to do.  But I'm not waiting until June as I did my first one last night.

Mining missions - Yes, just to prove I'm crazy I put this on the list.  I probably won't do more than one, but I'll try.  I think doing one in low sec means I should get some sort of achievement unlock, preferably with a picture of CCP Guard doing something crazy attached.

R&D missions - I know have the standings with Boundless Creation to do the level 4 R&D missions with one of my pilots.  Also, I have a couple of agents in the neighborhood I live in.  Might prove interesting.

Plexing - I haven't done a plex in low sec yet.  I really wish some of the lower rated plex would spawn as I'm not comfortable bringing in a battleship (or a command ship) into low.  I wonder if a Loki would work in a 5/10.

Manufacturing/invention - I used to do some T2 production for personal use before OTEC came around.  Perhaps the time has come to look into the profession again.  At the very least I can probably make T1 ammo for sale.  I would also like to get into manufacturing exploration equipment.  I'm already set up to make Sisters' gear but that's in high sec.  I wonder what the new stuff will look like.

Now, perhaps living the low sec carebear lifestyle is just a dream that CCP will eventually crush.  Something tells me that the designers would like to see lots of explosions between high and null.  But EVE is a sandbox and if the devs want to push me in one direction, that doesn't mean I have to go there.
Posted by NoizyGamer at 8:52 AM