CCP's War On Bots: The Graph And Speaking For The Devil

I know that a lot of discussion is occurring withing the EVE blogosphere about what the average concurrent users graph on EVE-Offline.net actually means for the future of EVE Online.  Some view the 24.2% decline in the average concurrent user number in the 15 weeks following the launch of Odyssey with alarm.  They see the expansion as a failure and even a sign that EVE has finally reached its peak and is doomed to decline.  Some news outlets have even confused the ACU graph with subscription numbers, thus contributing to the alarm.  At the point, all but the most optimistic only see a best case scenario that EVE will hold onto its current numbers and the ACU graph will continue to show a plateau.

Let me play devil's advocate for a bit.  Did that big drop occur because players abandoned the game, or because CCP made some decisions that they intended to produce a drop in the number of accounts logged into the game at the same time?  I believe that CCP did intentionally did two things that resulted in lower concurrent user numbers.


First, we have to look at the War On Bots™.  In 2011 and 2012, the EVE Security Task Force/Team Security forced botters to decrease the amount of time they let their bots run.  From reading their forums, botters stopped running their bots 23/7 in order to avoid the automatic bot detection system, opting for a more conservative 8-10 hours a day.  I should add that some botters were able to successfully bot 12 hours a day with caution.  Using the 6,200 accounts banned during Unholy Rage as an estimate of the population of botting accounts and assuming that the average number of hours bots ran was reduced from 20 hours/day down to 10/hours a day, that means that a conservative estimate is that the War On Bots™ has suppressed the average concurrent user number by approximately 2,500.  I should add that's assuming that botters just slowed down and none of them left the game.  With a little less conservative parameters, the number is probably closer to 3,000.

Team Security kept an aggressive stance on the War On Bots™ in 2013.  I marked some of the bigger events in the graph above in red.  At the beginning of March Team Security put in place a process that detected the use of Red Guard, a program designed to allow users banned by CCP to disguise their computer's digital fingerprint.  This not only led the Red Guard developer to put the application behind a pay wall to minimize bans, but other bot developers took their bots off-line for a time until they could implement measures to avoid detection.  Team Security also announced a change in the ban policy, with the punishment for a first ban rising from 14 days to 30 and a permanent ban issued for a second offense.  The final blow leveled by Team Security occurred in mid-April when 2,350 accounts were banned for a month for using a hack that allowed a ship to warp to zero on a gate while auto-pilot was engaged. 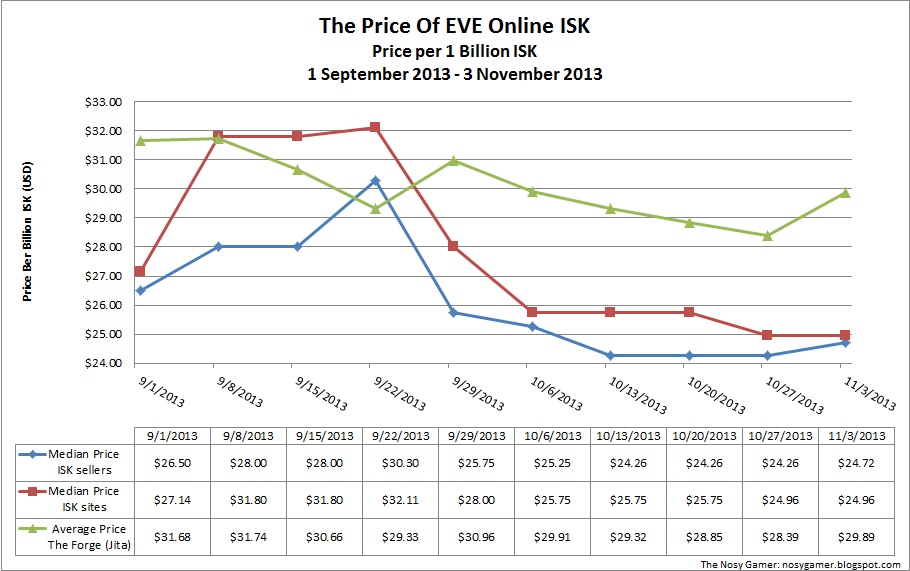 The last action began at the end of July with bans hitting some botters backup bot farms.  The professional botters assume they will eventually be banned so they train another set of bots to replace them.  Because of the time required to train Tengu (and preferably Raven) pilots, a widespread ban of these baby bots following or immediately preceding the ban of the active bots can disrupt a botting operation for weeks.  I believe that is what we saw for several operations, with an ISK crunch hitting the major illicit gold selling sites to the point that two big players, IGE and MOGS, decided to get out of the ISK selling business.  I find the fact that the price of ISK started to decline at the same time as the ACU numbers started to increase again interesting.

Of course, the War On Bots™ doesn't explain the big drop from the launch of Odyssey to mid-September.  The incredible thing to me is that from before the launch of the expansion to the Battle of 6-VDT that a major war was fought in Fountain and the ACU count declined by 14.1%.  Do major null sec wars result in declining numbers of users logged in or does another explanation exist?


He credited the changes with a decrease in the presence of bot bans.  The dramatic decrease in the concurrency numbers following the launch tends to back up his assertion.  While I usually follow the more advanced bots, the simpler bots were probably affected greatly by the changes.  The changes in Odyssey basically raised the bar on the skill level needed to successfully develop bots for EVE.

Of course, I don't think the ice belt changes were designed just to combat bots.  Before Odyssey one common style of play was to park a Mackinaw in an ice belt, target a block of ice and walk away from the keyboard.  All the player needed to do is check on the ship every 30 minutes or so.  In other words, the player wasn't really playing.  Devs hate that.  So the ice belts were changed to depletable anomalies that would respawn after 4 hours.  That did away with a lot of the AFK ice mining, which also reduced the amount of time a lot of people played, lowering the ACU count further.

Now, don't get me wrong.  I am not saying that the Odyssey expansion was great.  I pretty much abandoned exploration in low sec due to the changes.  But I think much, if not the majority, of the reduction in concurrent user numbers in Odyssey was by design.  CCP has stated they do not like passive income, and what is more passive than either botting or AFK mining?  Of course, reducing those two activities will decrease the ACU number on the famous chart on EVE-Offline.net because those two activities involve an account staying logged in for much longer than the average account.  And while some people just look at the raw number, CCP is looking at the quality of play when the person is logged in.  If the quality is bad, new players won't stick around.  A bad experience is not what EVE Online needs to grow.
Posted by NoizyGamer at 7:00 AM