In yesterday's post I forgot to mention my experience with exploration in Odyssey and how it could impact the average concurrent user number. 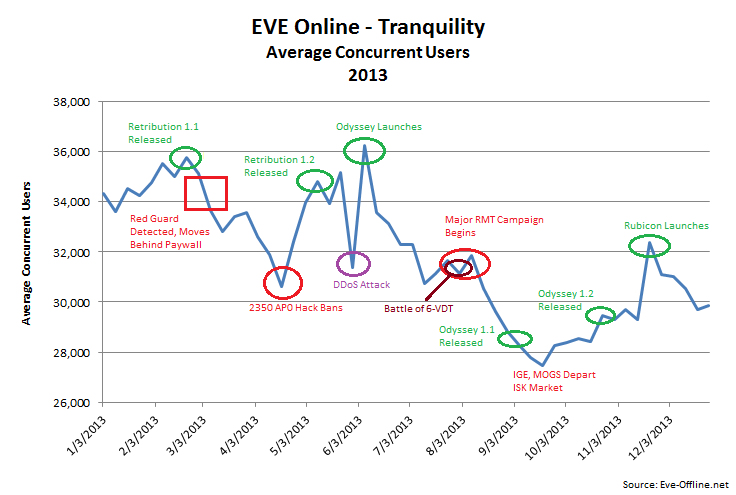 Rhavas put my thoughts into something intelligible yesterday.


Before Odyssey, when I ran anomalies I used two accounts.  One would scan down the sites and hack the cans while the other stood overwatch and killed all the rats that appeared.   That did tend to limit the area I would cover, because moving a non-cloaky ship around low sec does entail some risk.  If CCP hadn't announced the exploration changes, I probably would have purchased a Tengu or a Loki to run around in.

Because of Odyssey, I didn't need to train up, and then save up, for an all-purpose exploration ship.  I was free to cut loose and roam around in a singe ship.  While I only roamed through Heimatar, I was able to rake in more loot, even if I needed to visit more sites to do so.  So I may have spent more time exploring, but as I was only logged on with one account, I counted less toward the average concurrent user numbers because I no longer used two accounts.  So, even though I played more right after the release of Odyssey, I contributed to that sharp drop following the expansion's launch.

I really have the feeling that mine is not an isolated story.  I also believe that CCP made a conscious design decision to try to open up exploration to more people.  In addition to making probing a lot easier, the devs also decreased the ship requirements so tech 3 cruisers or multi-boxing was a significant advantage.

Of course, many people didn't like the changes to exploration and went off to do other things in game.  I wonder how many of those people started doing things that required less accounts logged into EVE than they were using in exploration.  So in addition to the ice belt and null sec anomaly changes, we can add exploration to the changes designed to lower the concurrent user number.
Posted by NoizyGamer at 9:02 AM