Super Belts: A View From A Small Fish

Before the week ends and EVE Vegas becomes a distant memory, I just wanted to comment on CCP Rise's intriguing idea of just having one super-sized asteroid belt in a system instead of several smaller ones like currently exists in New Eden.    Perhaps having one big belt, like exists in our own solar system, would make EVE more realistic, but from the perspective of this small fish in the EVE PvP ecosystem, I'm not a big fan of the idea. 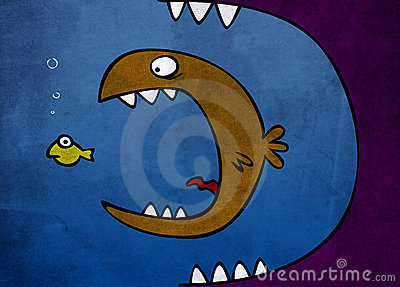 In the grand scheme of things in EVE, I'm the tiny yellow fish feeding off the plankton, except in my case the plankton is the ore in the asteroid belts.  As such, my gameplay partially consists of frustrating the bigger fish and leaving them hungry.  One of the tactics I use is searching out belts that are out of d-scan range of all the gates in a system.  I've found in low sec, most pilots on a roam won't bother to check the belts that are off the beaten path.  Between that and mining in factional warfare space, I manage to mine with neutrals in system (aka everyone else except EVE University) fairly successfully.

Creating one big belt, while having the attraction of bringing players together, has the drawback of putting all the small fish in one place for the predators of New Eden.  Instead of PvPers having to go to a lot of mom and pop stores looking for an item, we would instead see a Wal-Mart pop up in every system.  On the face of it, that sounds like a great idea, right?  If so, try thinking like a small fish.

Small fish, if they have their way, don't want to wind up as someone's breakfast, lunch, or dinner.  I know, I know, hard to believe, but true.  As such, we don't want to put ourselves in too much danger.  PvPers would call us "risk adverse".  Ha!  Whatever makes them feel good.  But in low sec, would only have to check one asteroid belt instead of eight lead to more visits to belts by roaming gangs or less?  I'd predict more.

I know that if I have a high chance of encountering a ship in a belt that I would just stop going to that belt.  I had that happen to me with Kronos.  I had a pilot hunting me who would show up  whenever I tried ice mining.  Guess what?  I stopped ice mining and found something else to do.  Think that might happen with super-belts?  Maybe not.  CCP was nice enough to create the Higgs Anchor, so I might stick around.  But I think you would see some falloff.  In low sec, I wouldn't be surprised to see the share of ore mined in low sec drop from 0.4% down to 0.2%.

I'll briefly mention one other item that could hurt some of the bigger fish as well.  I have set up bookmarks in several constellations in Great Wildlands in preparation for doing a little mercoxit mining in my Prospect.  I discovered that having a lot of asteroid belts to warp to is helpful in avoiding bubble camps.  Asteroid belts, combined with bookmarks around the gates, helps get around those obstacles.  Do we really want to see less celestials to warp to in order to avoid bubbles?

Those are my thoughts on the concept of super belts.  Perhaps we need the challenge to shake things up.  But I think CCP should think about the effect on us small fish.  After all, without the small fish hanging around, what are the big fish going to eat?
Posted by NoizyGamer at 8:31 AM