I don't spend much time in null sec, but writing about real money trading in EVE Online means I have to keep an eye on that area of New Eden. One of the worst kept secrets is the prevalence of botters and associated illicit activity associated with the null sec rental alliances. In Team Security's Fanfest presentation, they revealed that the three alliances receiving the most bans are all well-known rental alliances. 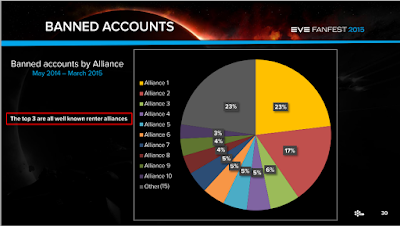 Botting and rental alliances are a natural fit. Botters need protection for their operations in the PvP sandbox. If the botters can also hide among a group of legitimate players, so much the better. Large alliances and coalitions, on the other hand, are in need of large sums of ISK to fund their activities. Some alliance leaders don't care very much about the source of their income, just that they get the money. The rental alliance gives the parent alliance a degree of separation from black market activities even as they protect the botters from interference by other players.

As I mentioned in the presentation, CCP's anti-RMT strategy involves making the sale of ISK and virtual goods as miserable and unprofitable as possible. Enforcement efforts by CCP's Team Security, however, cannot solve the problem alone. PLEX puts "top down" pressure on black market ISK sellers by capping the maximum real world value of the game's virtual currency. What if CCP could increase the "bottom up" pressure on illicit RMT operations by removing the incentive for EVE's null sec powers to offer protection to botters?

The changes to null sec sovereignty capture mechanics due out this summer promise to inconvenience illicit RMT operations further by removing the incentive for EVE's major powers to run rental alliances. The new FozzieSov system is much more favorable to the attacker, giving sov holders a further incentive to stay at home instead of wandering around looking to protect others. Looking at the current state of the major rental alliances shows the impact just the announcement had on the leadership of some of the major powers.

The youngest of the major rental alliances, Greater Western Co-Prosperity Sphere, has for all intents and purposes already shut down. The alliance, which hosted over 80 corporations and over 4000 members a month ago, now only possesses 5 corporations with 82 members. While the alliance still maintains sovereignty over 69 systems (63 in Vale of the Silent, 6 in Branch), I expect member alliances of The Imperium to take control once the sov bills come due.

All signs indicate that a second rental alliance, Northern Associates(dot), is in the process of shutting down. While the alliance still controls 129 systems, [NA.] gave up or otherwise lost sovereignty over 141 systems in the first 11 days of May, including 50 systems on 7 May. In an apparent mass kick event yesterday, Dotlan shows that 113 corporations with 1461 members left the rental alliance at 17:07:52. While only time will tell, I expect Northern Associates(dot) to shed most of the remaining 16 corporations and 620 members by the launch of Aegis on 7 July.

Not all rental alliances are choosing to fade quietly away. Shadow of xXDeathXx (84 corp/5275 members) and Brothers of Tangra (112 corp/3089 members) are still holding strong in the Drone Regions. But I question the ability of Legion of xXDeathXx's 1800 members to protect a large rental alliance like Shadow of xXDeathXx's 330 systems, especially when faced with the prospect of defending 81 of their own. However, the geographic isolation of the Drone Regions could work in the rental alliances' favor. Will anyone really want to challenge for control of the galactic north-east if better space is available elsewhere?

Of course, getting rid of rental alliances will not eliminate the sale of black market ISK in EVE Online. Botting may even become more popular as sov-holding entities look to establish and maintain high system indexes. But the fallout from player complaints about structure grinding may make operating an illicit RMT operation in EVE just a little bit more difficult. Or at least annoying.