The gaming press is full of bad news for subscription MMORPGs lately. From an estimated 18% drop in subscriptions for EVE Online over the past two years to World of Warcraft losing 3 million subscriptions in the first quarter, 2015 is providing a lot of arguments against the subscription model. But no serious observer thinks that either game will shut down in 2015.

Yesterday brought the first serious threat to the existence of a subscription game in 2015. NCSoft released its financial report for the first quarter and the figures look bleak for Wildstar.

After using the currency converter at Bloomberg to convert Korean won to U.S. dollars, I found that Wildstar only made $2.4 million in sales during the first three months of 2015. Not good. Looking at the history of sales for Wildstar shows an even bleaker picture. 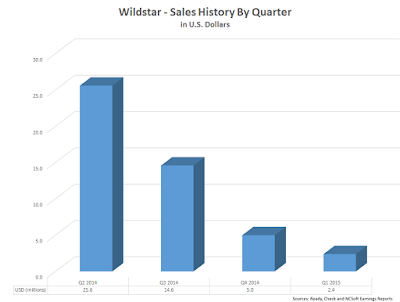 How much did NCSoft invest into Carbine after purchasing the company in 2007? I don't know, but since Wildstar launched 6 1/2 years after the purchase, I figure the amount is closer to $100 million than the less than $50 million the game earned over the last year. Given the current health of the game, with only 4 shards still running (and 2 of those fairly deserted PvP worlds), I wonder if NCSoft will ever make back its investment in Wildstar's development.

The big question is, will NCSoft decide to cut its losses and shut down the game. While many point to NCSoft's closure of City of Heroes, I look at the decision to close Tabula Rasa. According to NCSoft's Q2 2008 earnings statement, TR earned 2 billion KRW in the last full quarter before the announcement of the plan to close the game servers in February 2009. Wildstar earned 2.6 billion KRW in the first quarter this year. Tabula Rasa only lasted 15 months, showing that NCSoft is not afraid to cut its losses.

When I looked at the state of Wildstar at the end of last year, I predicted that the game would not abandon the subscription model. I still don't. The process to convert a subscription game to either a free-to-play or buy-to-play game takes a lot of time and money. Unless Carbine is currently working on the conversion, I question whether NCSoft will cough up the cash. Why should they try to save Wildstar when Blade and Soul is performing so well? But without a revamp, I wonder how much time Wildstar has left.
Posted by NoizyGamer at 12:04 PM

Email ThisBlogThis!Share to TwitterShare to FacebookShare to Pinterest
Labels: wildstar